Man Punched In Face By Stranger On F Train In Brooklyn

A Manhattan man is recuperating after he was punched in the face in a seemingly random attack on an F train in Brooklyn last week.

Matthew Steele, 35, told Gothamist that he boarded the F train at Bergen Street around 4:30 p.m. on June 29, heading toward his home on the Lower East Side.

"The first thing I knew was a punch to the face," he said. "I was just standing by the door of the train. I had my headphones on, so I was maybe a little unaware of what was going on around me. I don't know if the guy said anything to me first. I didn't see him before he punched me."

Steele says the unknown attacker hit him hard in the side of his head. 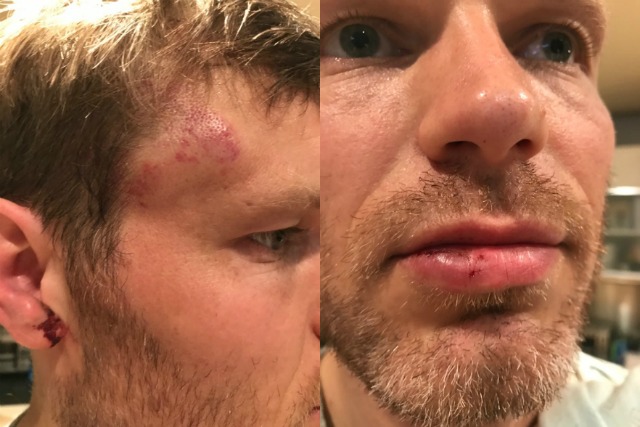 "I put my arms up, but he kept punching until I was on floor," he said. Then, Steele says, the train pulled into the Jay Street-MetroTech station and the assailant fled. The man took nothing. Dazed, Steele also left the station and headed up to the street, where a traffic cop alerted him that other officers were looking for him.

"I went down to the station, and police were there. They called an ambulance," Steele said. Apparently someone called 911 about the attack, but by the time officers arrived, there were no witnesses in the station.

Steele declined the ambulance ride, but after stopping at home, he went to Lenox Hill Hospital's emergency medical center in Greenwich Village. Doctors there treated him for a swollen ear, laceration to his ear canal, a busted lip, and a big lump on his head.

"I was kind of relieved because I'd been attacked before, and it was a lot worse [then]. I lost my front tooth, a long time ago," he said. "I still have my teeth. He didn't stamp on my head."

Steele noted that though the train he was on was relatively crowded, no one jumped in to stop the assault. "I felt a little disappointed. I felt a bit alone," he said. "I don't really blame anyone for not jumping in. I think everyone's got places to go."

The NYPD confirmed the incident to Gothamist. No arrest had been made as of this morning and the investigation is ongoing. Steele didn't get a good look at his attacker, and he isn't confident police will be able to find him.

He's still shaken by the incident.

"I've never seen anything like it, just in the middle of the day," he said.

#assault
#attack
#f train
#matthew steele
#MTA
#nypd
#original
Do you know the scoop? Comment below or Send us a Tip