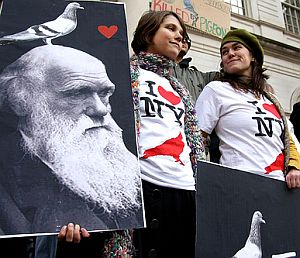 A street sweeper employed by the Doe Fund, a charity that employs homeless New Yorkers to clean city streets, picked up a $2,500 bonus last month by defending the pigeons on the Upper East Side. According to In Defense of Animals, Desi Stewart witnessed a man spreading bird seed on the ground and “netting a large number of pigeons.”

Stewart had noticed signs around the neighborhood urging citizens to report pigeon poaching; when he called the Department of Environmental Conservation they dispatched an officer to the scene and arrested the culprit, who pleaded guilty last week and will have to pay three fines for pigeon netting. Stewart received a reward.

Pigeons are classified as state property and it’s illegal to harm them. But despite the fact that pigeons are legion in the city, poaching is fairly common, often for the purposes of selling them to private gun clubs. Anyone witnessing a pigeon netting in the five boroughs of New York City can try to nab the reward by calling New York State DEC Officer Joseph Pane at (718) 482-4941.

#netting
#pigeon
#poaching
#reward
Do you know the scoop? Comment below or Send us a Tip