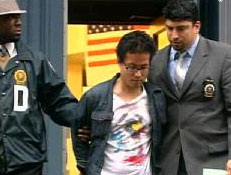 A 29-year-old Chinatown resident was charged with murdering his new girlfriend in the apartment he shares with his grandmother. Michael Chin Lenahan allegedly called his brother in NJ to say "I screwed up." His mother later went to the apartment and found a woman's body on her son's bed, under clothes.

Police say Lenahan and Lorna Santiago had a date on Saturday night. They started at a restaurant on Third Avenue and then went to a strip club, Rick's Cabaret, where he bought her $50 in lap dances. They returned to Lenahan's apartment at 20 Confucius Plaza. From the Post:

On Sunday, however, the couple, who had been dating for just a week, got into an argument.

Lenahan demanded the $50 back. The woman refused and kicked him in the groin.

Lenahan then lost it, grabbed her by the throat and choked her, investigators said.

He left her body lying on his bed and scrawled the apology, which was accompanied by a bizarre drawing, investigators said.

On Sunday and Monday nights, he slept beside the decaying body, they said.

Lenahan called his brother to say he made a mistake and that he would kill himself. The Daily News reports the brother went to the apartment to escort their elderly grandmother - who was in the home during the murder - out before the body was discovered. Lenahan fled but was convinced to surrender at a McDonald's near the South Street Seaport. A neighbor expressed her shock to WABC 7, "It's very unnerving, shocking frankly...It's a very quiet building, you never hear of anything like that. Very unsettling, actually."

Lenahan is described as an unemployed artist who has a record for grand larceny and had been depressed lately; he also suffers from spina bifida. He was charged with second-degree murder.

#Chinatown
#crime
#daily news
#dating
#elderly
#maps
#mcdonald's
#murder
#news
#nj
#On Sunday
#police
#south street
#south street seaport
#strip club
#the daily news
#Third Avenue
#usa
#wabc
Do you know the scoop? Comment below or Send us a Tip
A new Gothamist is coming! We’ve moved comments over to our beta site. Click here to join the conversation and get a preview of our new website.