Man Kills Girlfriend, Self In Front of Her Child 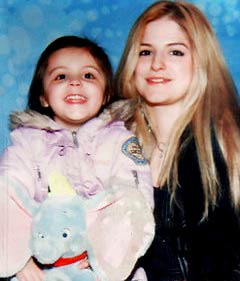 An argument escalated into arson and then a murder-suicide, all in front of a small child, in Borough Park early yesterday morning. After setting their apartment on fire, police say that Christopher Flynn shot his girlfriend Christina Scarabaggio and then turned the gun on himself. Scarabaggio's 4-year-old daughter Bianca Perez was found crying over her mother's body outside.

Flynn, who had a history of drug arrests, and Scarabaggio, a nursing student, had been dating for two years and had moved to an apartment on 62nd Street after living with Flynn's parents in Brighton Beach. Last month, Flynn had been arrested for assaulting Scarabaggio (he had also threatened her with a gun), who then got a temporary restraining order against him. Scarabaggio's mother told the Post that her daughter stayed with Flynn because she had no other means of support. Apparently Flynn had also claimed to change his ways.

Early Saturday morning, neighbors heard the couple arguing. Police believe Flynn started two fires, one with a dish towel and another with a teddy bear, causing Scarabaggio to run out of the house with her daughter. The Daily News says that she managed to get to her car, but Flynn had chased after them and shot Scarabaggio multiple times, before shooting himself in the head.

A neighbor who called 911 told reporters, "I saw the little kid crying, 'Mommy! Mommy!' ...I saw the body dead on the [pavement]. The kid was sitting by the feet." When first responders arrived, Bianca was crying over her mother's body. A friend said that little Bianca was confused by the violence, "[Bianca] said that ‘Chris shot mommy. And please don’t put Chris back together. He’s a bad person. And where’s mommy, when is she coming home?'"

Bianca's father Joseph Perez picked her up from Lutheran Medical Center. According to the NY Times, Perez said, "[Flynn]’s a violent guy. That’s what [Scarabaggio] told me. Thank God my daughter’s O.K.” The News noted that Perez mentioned his mother would care for Bianca, and that "Police said it was unlikely Perez would get custody of the girl because he had been arrested last year for selling drugs."