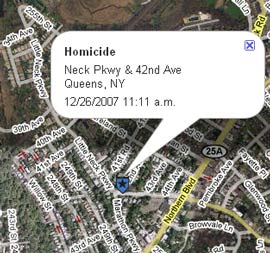 Yesterday, the body of a man who had been stabbed to death was discovered on a handball court in the Little Neck section of Queens. The murder is the first in the neighborhood since 1994.

A passerby found the body in Admiral Park, near the chain-link fence. The ME's office is conducting an autopsy, but the victim, 35-year-old Damingo Hernandez, had stab wounds in the torso and slash marks on his face, according to the Daily News. The police are investigating whether Hernandez was killed at at the court, or if he was killed somewhere else in the park.

Residents were upset about the murder, one saying, "My kids play in this park. It's just a shock." However, Admiral Park has been a location for drug dealing. The handball court is also located across the street from PS 94 (the school is on holiday break through January 2).