Man Killed by Own Gun During Police Struggle 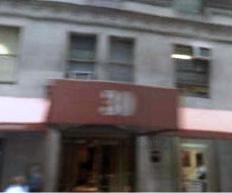 A man was killed by a "bullet from his own gun" on the roof of a Midtown building at 30 East 40th Street. The police say the man, who was found with "rope, a hacksaw and three Dell laptops in the intruder's backpack," may be a man with a number of burglary and stolen property arrests.

A building employee called the police after discovering a break-in. Superintendent Joe Aguasviva told the Daily News he had seen the suspect from other break-ins over the years, "Just when I thought he wouldn't come back, boom! He comes up again."

Police found the suspect on the roof and asked him to stop, but he ran away. The police chased him into the elevator mechanical room, where, according to the NY Times, "lieutenant grabbed the man’s clothing to pull him out, and the sergeant, who approached from a different direction, saw the man raise his hand toward the lieutenant with something wrapped in a blue material that looked like a handgun." The gun turned out to be wrapped in a sock.

The sergeant then tried to beat the gun out of the suspect's hand with a police radio, and a shot from the suspect's gun fired, hitting the suspect in the head.

#crime
#midtown
#police
#robbery
#struggle
#suspect
Do you know the scoop? Comment below or Send us a Tip
A new Gothamist is coming! We’ve moved comments over to our beta site. Click here to join the conversation and get a preview of our new website.