A 23-year-old man is in critical condition after police say a group of men attacked him, then a hit-and-run driver plowed into him in Richmond Hill, Queens early on Saturday morning. 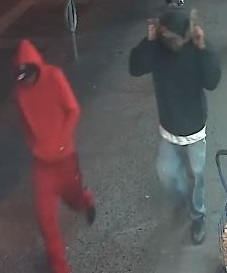 The other two. (NYPD)

The victim was walking on Liberty Avenue between 108th and 109th streets at 4:15 a.m. when he asked a crew of at least six guys, police believe, whether one of them had a cigarette. The group ignored the man, but he kept asking, and according to police, they attacked him.

The gang assault caused the victim to stumble into traffic on Liberty Avenue, where cops say the driver of a Toyota ran into him. Paramedics drove the victim to Jamaica Hospital Medical Center in critical condition. The driver, 23-year-old Emir Zulfiqar of Canarsie in Brooklyn, later returned to the scene and police there arrested him. He is being charged with running a red light and leaving the scene of a crash.

Police are seeking the assailants.

Police ask people with information about the incident to call the Crime Stoppers Hotline at (800) 577-TIPS, visit www.nypdcrimestoppers.com, or text tips to 274637, then enter "TIP577".

#attack
#bumming a cigarette
#cis
#crash
#gang assault
#hit and run
#nypd
#queens
#richmond hill
Do you know the scoop? Comment below or Send us a Tip