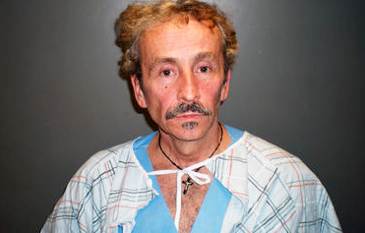 Three years ago, Michael Davitt was fired from his job as a substance abuse counselor at the Rockland County mental health office. And for three years, Davitt has been appearing at legislative sessions and allegedly disrupting meetings by accusing officials of a "cover-up" and corruption. But Davitt's protestations failed to win him his job back (a Rockland County spokesperson tells CBS 2 he "couldn’t perform his duties"), so yesterday he kicked it up a notch by staging a dramatic protest on the Tappan Zee Bridge. They're sure to rehire him now!

Around 10:37 a.m., Davitt "undertook a series of steps that indicate an almost military level of precision and preparation," LoHud.com reports. He parked his Dodge Ram near the center of the bridge, connected a rope ladder to the vehicle's frame, tossed it over the edge, and then climbed down about 75 feet, halfway between the river and the bridge span. There he hung out for about three hours, smoking cigarettes and drinking from a thermos, above a banner reading "ROCKLAND EXECUTIVE LEGISLATURE COVER UP RETALIATION." 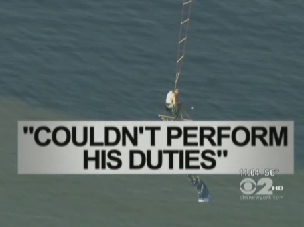 Traffic ground to a near-halt on the bridge as police hustled to get Davitt down. At one point he requested a tobacco pipe, which police denied, but there was no other communication between Davitt and police. Two Special Operations Response Teams were called in from upstate, according to LoHud.com, and upon arrival they attached their own harnesses to the rope ladder and disconnected it from the truck. They then lowered it slowly down to a waiting police boat. But ten feet about above the chilly Hudson River, Davitt took off his pants, jumped in, and started swimming downstream.

He was quickly fished out by a Yonkers police boat, and the Post reports that as he was loaded into an ambulance, he yelled, "It’s the only way I could get anyone to pay any attention to what happened to me!" After a medical evaluation, Davitt was charged with criminal trespass, reckless endangerment and resisting arrest. He was released without bail, and at press time it was unclear if he got his job back.

But neighbors were surprised to see him dangling from the bridge; they describe Davitt as a "normal" guy who lives with his wife and works on his yard. "He seems like a cool guy," one neighbor tells LoHud.com "I've known him for a while. He's into cars."

#michael davitt
#protesters
#rockland county
#tappan zee bridge
Do you know the scoop? Comment below or Send us a Tip