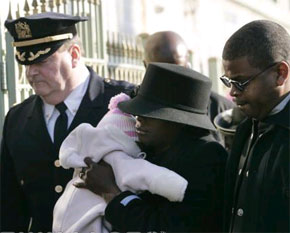 A Brooklyn jury found Allan Cameron guilty of killing police officer Dillon Stewart in 2005. Stewart's widow Leslyn, who is raising their two children, said, "Justice - I'm happy that the jury sent out the message of justice, loud and clear. [I'm] very, very happy. But at the same time very sad. Because of all we've had to deal with."

Stewart and partner Paul Lipka had stopped a 1990 Inifinti for a traffic violation on November 28, 2005 in Flatbush. Someone in the Infiniti fired at the police officers (who were uniformed but in an unmarked car) five times and fled, causing the police officers to follow it. During the chase, Stewart realized he was shot - the bullet missed his bulletproof vest and pierced his heart. Cameron was later found at his girlfriend's house with a gun.

Cameron's lawyer tried to suggest that Stewart was killed by friendly fire, but a ballistics expert from the NYPD said that wasn't possible - the bullet fragments found in Stewart didn't match what cops carry.

The jury deliberated for a few hours before returning with its verdict. Police Commissioner Ray Kelly said, "It serves as a warning to those who would target police officers that justice will be done."

Cameron will face sentencing on November 8. He could receive life in prison without parole.
Photograph of Leslyn Stewart, holding a daughter, during the 2005 funeral of her husbamd