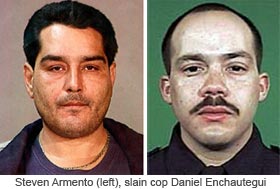 A jury delivered a guilty verdict for Steven Armento, a Yonkers man accused of killing an off-duty police officer in 2005. Armento had been trying to break into a Bronx home for drugs with friend, actor Lillo Brancato, when police officer Daniel Enchautegui intervened.

Prosecutors say Enchautegui, while in civilian clothing, shouted, "Don't move! Don't move!" However, Armento was armed, and he fired at Enchautegui, hitting in him near the heart. Enchautegui still managed to fire back, hitting both Armento and Brancato, before dying later. Armento's defense lawyer claimed that Enchautegui's "actions contributed to his death," claiming Armento had no idea an off-duty cop was confronting him.

The jury didn't buy the defense's story, delivering the verdict on its second day of deliberations. Armento, 51, now faces life in prison. Brancato, who was a lead in The Bronx Tale and appeared in episodes of the Sopranos, will be tried on November 7. His lawyer, Joseph Tacopina, said, "They are two very different cases, and that's why they are two separate trials. Steven Armento was convicted, but Steven Armento had a gun and shot a police officer. Lillo Brancato didn't have a gun."

The NY Daily News reports that police officers clapped for Enchautegui's sister after the verdict. Yolanda Rosa tearfully said, “My brother wasn't a notch under someone's belt. That was my baby brother. He served the community of New York until the day he died.”