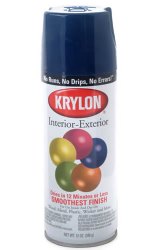 A man called 911 after discovering his friend, whose face and back he had spray painted blue as a joke, would not wake up. The painted friend was pronounced dead at the scene.

The two 19-year-olds, who were friends and worked together at a bar on Bleecker Street, had been drinking all night. When one passed out, the other spray painted him before falling sleep himself.

According to the NY Times, the victim's body was found at the bottom of the stairs (the other man lived in a basement apartment) and investigators aren't sure "whether a fall, excessive drinking or the paint had caused or contributed to his death." A source told the Daily News, "He's laying there in his boxers all spray-painted blue."

The friend has not been charged with any crime, but a medical examiner will be conducting an autopsy. There is an urban legend that the actress painted gold in Goldfinger died (she didn't).

#death
#mystery
#queens
#spray paint
Do you know the scoop? Comment below or Send us a Tip