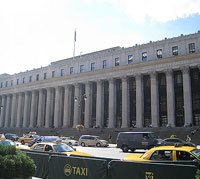 Late yesterday afternoon, a man was killed in midtown Manhattan, outside the James Farley Post Office on 8th Avenue at 33rd Street—which is also across the street from Penn Station and Madison Garden. According to police, he had bumped into another man who fatally stabbed him.

WCBS 2 says the two got into an argument, "causing the suspect to go into a rage and stab the man in his 20s twice." The victim, Christopher Guitterez, was pronounced dead at the hospital.

The attacker fled the scene after the incident. Police are searching for him and WABC 7 describes him as a "black man, 25-35 years of age, 5'10" tall, 160 lbs, with short black hair...wearing a Black T-shirt with blue jeans and was carrying a camouflage military style backpack with the letters US printed on the back." The Daily News reports that a German tourist took photographs of the stabbing and showed them to police.

Update: The NYPD has now released photographs of the suspect and urge people to contact Crime Stoppers with information by either calling 800-577-TIPS, texting CRIMES (then enter TIP577), or going to the Crime Stoppers website.

#Farley POst Office
#fatal stabbing
#midtown
#penn station
#stabbing
Do you know the scoop? Comment below or Send us a Tip