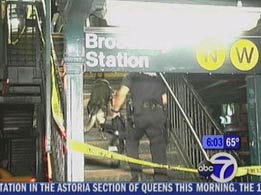 Early this morning, a man died after being shot "next to a token booth" at the southbound Broadway N platform in Queens. WABC 7 reports that the victim was 19 and he was shot in the back of the head around 1:15AM.

A witness said, "I heard, 'Boom! Boom! Boom! There was a lot of blood. He had a big hole in his head." According to WCBS 2, there were a number of witnesses because many people had been coming out of various bars and clubs.

Police are looking for a group of four or five men who were seen running from the station. There is no known motive yet.

#bars
#broadway
#clubs
#crime
#people
#police
#queens
#running
#wabc
#wcbs
Do you know the scoop? Comment below or Send us a Tip
A new Gothamist is coming! We’ve moved comments over to our beta site. Click here to join the conversation and get a preview of our new website.