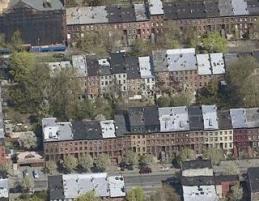 Just a few blocks away from the Pratt Institute, a man died after being shot three times on Clifton Place yesterday afternoon. Lawrence Sumpter, a Staten Island resident who had grown up in the Clinton Hill neighborhood, was being chased by a gunman. Sumpter headed to 22 Clifton Place, a brownstone in renovation; a witness told the Post that Sumpter tripped and his pursuer "just got over him and emptied [his gun]."

Another woman told the Times she heard the gunman shouting, "You think I’m a joke! I told you not to play with me!" A worker at 22 Clifton Place had run to the basement when he heard the shots. Sam Saliman said, "I went upstairs and saw the guy. He looked dead."

The killer was apparently known to neighbors as "Psycho" and was believed to have two guns. He was also riding a bicycle. Another witness said, "He looked content. Everybody was moving out of the way." Police suspect the killing may be related to a turf war and have not made any arrests yet.

The street's residents who knew Sumpter, who ran a window installation business and had four children, described him as "caring and generous" - he had sponsored neighborhood children's school activities and sports.