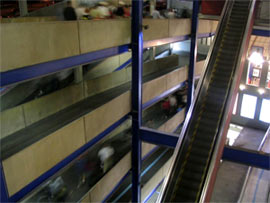 Last night, during the Mets-Cardinals game, a Cards fan fell 25 feet from an escalator at Shea Stadium. The Post reports that Justin Larson, 26, is in critical condition at New York Hospital Queens, with "broken ribs, bruising on the brain, and a collapsed lung."

A source told the Daily News Larson was "attempting to slide down a bannister in the D section" when he fell around 10 p.m. A friend of Larson's said to the Post, "We were just goofing off, having fun... Justin hops onto the escalator that was broken. He got stuck near the top and he fell backwards...and slammed his head on the concrete." A driver outside the stadium who heard the fall told the News, "It was a terrible sound. I never want to hear that again."

The escalators are turned off during the 7th inning (last night's game went into extra innings, ending well after midnight) and fans are asked to exit Shea via the ramps. And earlier this year, a man fell to his death from the escalators at Shea.

Photograph of Shea Stadium escalator from the Bridge & Tunnel Club

#escalator
#mets
#shea stadium
#Shea Stadium escalator
#sports
Do you know the scoop? Comment below or Send us a Tip