The police are investigating an assault that took place on the Upper West Side this past weekend. According to investigators, a man was beaten at an address that matches that of Les Hommes, which is described as a gay male entertainment store as well as a bathhouse. 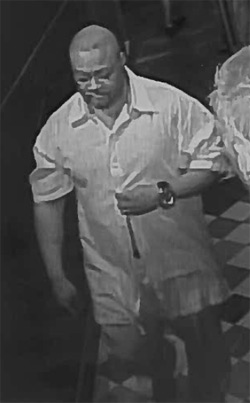 According to the NYPD, the incident occurred at 217B West 80th Street on Saturday, August 15, around 9:45 p.m.: "The 42-year-old male victim sustained a laceration above his right eye and facial fractures while inside of a room at the location... The victim was transported by EMS to St. Luke’s Hospital where he was treated and released."

The police released a surveillance image of a black male, explaining that he's "wanted for questioning" and "was with the victim during the time the victim sustained the injury."

A Late Night Cruising review described the venue in 2013, "Adjacent from the turnstile is the movie theater room. Once you pass the turnstile, there's a sign stating. NO RE-ENTRY, NO REFUNDS, NO SEXUAL ACTIVITIES. The first room has regular PG rated movies playing on the screen with several benches facing the screen and a long bench on either side of the tv screen. As you round the corner, on your left you will see a row of ten private booths," adding, "These men are also very respectful and will give you your space if you're not interested in them. So please don't be nasty or rude to them simply because you're not attractive them."