Man Arrested At St. Patrick's Cathedral With Cans Of Gasoline Was Also Arrested At NJ Church On Monday

The man arrested for bringing cans of gasoline, lighter fluid, and butane lighters to St. Patrick's Cathedral is a philosophy PhD student at CUNY, and also taught classes at Lehman College and Brooklyn College.

Marc Lamparello, 37, was stopped by a security guard at the Fifth Avenue house of worship just before 8 p.m. on Wednesday, roughly 48 hours after a fire partially destroyed the historic Notre Dame cathedral in Paris, France. During the conversation, some of the gasoline was spilled onto the church's floor, but Lamparello left, according to police. Authorities say that the guard told NYPD officers on Fifth Avenue, and the officers caught up with Lamparello, who claimed that his car had run out of gasoline. When they checked his minivan, which was parked on Fifth Avenue, police said it was not out of gas.

Lamparello was charged with attempted arson, trespassing, and reckless endangerment. It turns out he was also arrested at a Newark church on Monday night. NBC New York reports:

Two days before the St. Patrick's incident, sources say Lamparello had a confrontation with police after refusing to leave the Cathedral Basilica of the Sacred Heart in Newark, New Jersey. When an officer told him it was closed, Lamparello said, "If you want me to leave tonight, you're gonna have to handcuff me and arrest me tonight and take me to jail," law enforcement sources tell News 4. He still didn't leave.

Other officers arrived, at which point Lamparello threw himself onto a pew and yelled, "No!" then scuffled with police who tried to apprehend him, sources say.

As he was being taken out of the cathedral, Lamparello told police he wasn't leaving. "God wants me to be here. I know all the sins the priests have committed," he said, according to law enforcement sources.

Lamparello was charged with resisting arrest, defiant trespassing and interfering with the administration of law for the Newark incident.

He was taken to Bellevue Hospital for a psychiatric exam on Thursday, the Daily News reports.

Lamparello has been a part-time philosophy professor at Lehman College, and was previously an adjunct at Brooklyn College. A Lehman College spokeswoman Sarah Ramsey told the Post, "We are taking the appropriate steps to terminate the individual’s employment with the college." 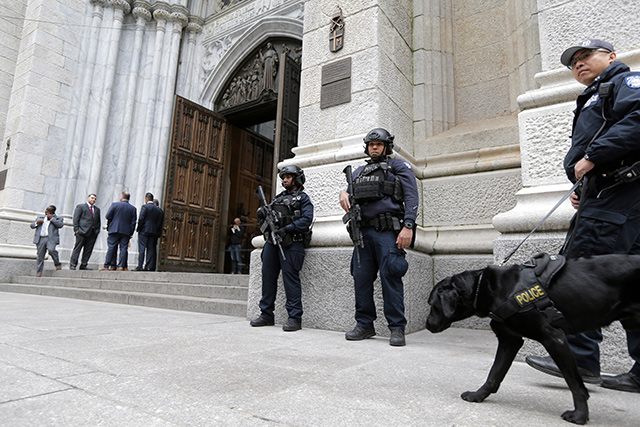 Lamparello is due in court today. He reportedly lives with his parents in Hasbrouck Heights, NJ. His father, Leonard Lamparello, told the News his son's behavior was "Extremely out of character... He’s a brilliant professor. His writings — other professors can’t even understand his writings. Something happened, we don’t know.”

As for St. Patrick's, the Post notes that the church "installed state-of-the-art fire alarms and smoke detectors inside the iconic building" during its 2015 renovation... The attic, which like Notre-Dame’s is made of wood, was outfitted with a high-fog misting system and is monitored 24/7 using cameras, according to experts who worked on the project."

#attempted arson
#gasoline
#marc lamparello
#midtown manhattan
#st. patrick's cathedral
Do you know the scoop? Comment below or Send us a Tip