A man used a cinder block to shatter a Harlem store window, then yanked a mannequin of President Barack Obama out of the display and onto the street this weekend. The store's manager told the NY Post that the assailant explained, "Yes, I broke your window because Barack Obama was talking to me and I didn’t like what he was saying."

The incident took place at the adult store Romantic Depot, on Broadway near West 138th Street, on Saturday, around 8 p.m. Video shows the man passing the store, then taking a cinder block from a work site—and tossing the block into the window.

"All we heard was glass shattering, so we're looking around, like, what is going on?" Corine Lew, the store manager, recalled to WABC 7. "At first, we thought one of the mannequins fell through the window...All of us ran outside, and we didn't see anyone until we went to the window and saw a cinder block. OK, so it wasn't a mannequin, someone threw it. So we started looking around to see who could it be? And then we seen a man pacing."

Lew added, "He said Barack Obama was telling him something, and Barack Obama's not gonna talk to him like that, and that he doesn't like Barack Obama. And he's so calm with it, so that's how we knew there was probably something wrong with him." 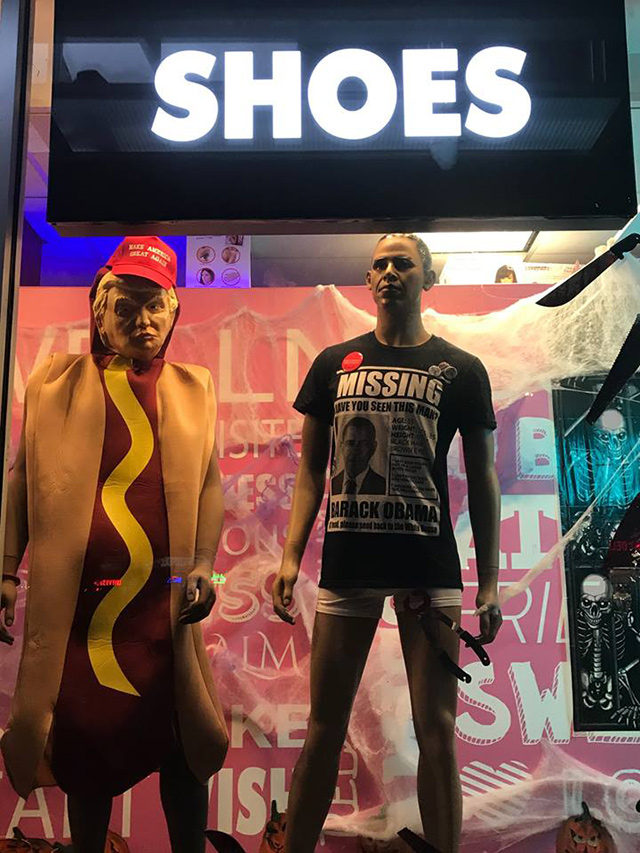 Romantic Depot owner Glen Buzzetti said that the store's security was able to apprehend the man, Rewell Altunaga, and hold him until police arrived. Buzzetti also revealed to the Daily News that a crowd of people was very upset at Altunaga: "We had to protect him from the crowd," he said. "...He could have been killed. We had women trying to kick him in the head. We had to protect him because he had damaged the Obama image."

Altunaga, 41, was charged with criminal mischief. Store employees claim that he once used a bat to damage a LinkNYC kiosk near the store.

The store is also getting a new Obama mannequin, since the old one is scratched up—Lew told the Post, "He just looks so sad!"

#criminal mischief
#harlem
#obama mannequin
#romantic depot
Do you know the scoop? Comment below or Send us a Tip