After a Parks Ranger was fatally shot near Washington's Mount Rainier on New Year's Day, authorities set off on a massive manhunt in deep snow to find the killer. Yesterday, the FBI announced that suspect Benjamin Colton Barnes was found "lying half-submerged in Paradise Creek and wearing one tennis shoe, a T-shirt and jeans, barely one mile from where he had fled into the woods." 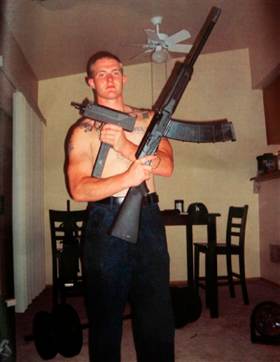 On Sunday, park rangers had tried to stop Barnes at a checkpoint, but he didn't stop his car, so later on, Park Ranger Margaret Anderson set up a roadblock with her vehicle. Barnes allegedly got out of his car and shot Anderson and fled into the woods.

The NY Times reports, "Park officials and law enforcement agencies had said they found ammunition, body armor and survivalist gear in Mr. Barnes’s vehicle, raising concerns that he might elude the authorities and hurt others in the park." But he was found "unequipped" with Pierce County Sheriff's Department spokesman Ed Troyer saying, "He appears to have not been a victim of any kind of violence other than the weather," which had been in the 30s and experienced significant snowfall.

Barners, who served in Iraq as a private, was described by an ex-girlfriend as being unstable. Nicole Santos was trying to restrict Barnes' access to their young daughter and said in a petition that he was "deployed to Iraq in 2007-2008 and has possible PTSD (post-traumatic stress disorder) issues. He gets easily irritated, angry, depressed and frustrated." Barnes is suspected in a Seattle house party shooting on New Year's Eve, which left four people injured.

Anderson was 34, married to another park ranger, and the couple had two kids, ages 1 and 3. She grew up in Westfield, NJ, and her father is a reverend there. The Star-Ledger reports, "At the pulpit of a small brick church in Westfield Sunday morning, the Rev. Paul Kritsch spoke of the importance of optimism for the new year, telling parishioners to meet adversity with strength and faith." Then a few hours later, he learned his daughter was killed.

#benjamin barners
#fatal shooting
#killing
#margaret anderson
#mount rainier
#park ranger
Do you know the scoop? Comment below or Send us a Tip