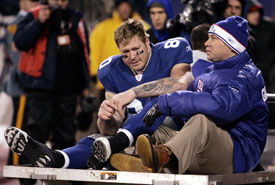 It’s time to end this soap opera. No, not the one currently in an extended run at Shea, but the one flaring up this past week at Giants Stadium. Jeremy Shockey is unhappy and pissed off. He is mad he broke his leg, he is mad the team didn’t let him onto the field at the Super Bowl and he is mad about his uncertain future.

Shockey has a legitimate gripe about the Super Bowl, why didn’t the Giants let him cheer from the sidelines? But the rest of his complaints are petty and demonstrate once again the sad truth about him. For all his talent and he is a wonderful tight end, Shockey cares more about himself than his team.

The argument that Eli Manning grew into a better player because Shockey was hurt last year is silly; Kevin Boss is not Shockey and QB’s benefit from having good receivers to throw to. But, it is fair to say that Manning grew into more of a leader without number 80 coming to every huddle complaining about not getting the ball. Shockey will most likely be an All-Pro again and the Giants will miss his production. But, his complaining and griping are too much of a distraction for a team that has plenty of distractions. Trading him won’t be easy, especially after he got into a fight with the GM, but it is the right move for the team.

Photo of Jeremy Shockey from December, 2007 by AP/Mel Evans

#football
#giants
#Jeremy Shockey
#Making The Call
#sports
Do you know the scoop? Comment below or Send us a Tip