Making The Call: Time For Change 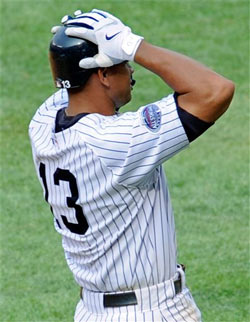 A payroll of $209 million should at the very least guarantee that a team is in the thick of the playoff race until the very end, but barring a miracle run, the Yankees won’t be. While George Steinbrenner is no longer in charge, the failure of the 2008 Yankees demands someone to be held accountable and fans are well within their rights to expect changes.

This space has argued in the past that Brian Cashman deserves to return next year and we are not changing that stance. Firing Joe Girardi would be a stupid move, he has had some bad moments, but he certainly seems capable of growing into the job. However, some of Girardi’s coaches need to be replaced.

Fans may howl for Kevin Long’s head since the hitting coach is the easy scapegoat when a team scores 200 runs less in a season, but Long coached the hitters last year and should therefore get a mulligan. Instead, consider Dave Eiland who was brought in with much fanfare about his ability to work with young pitchers. “Generation Trey” as Michael Kay calls them has combined for 4 wins, all from Joba Chamberlain. Kennedy and Hughes bombed out of the majors before getting hurt. Eiland has made some progress with Jose Veras, but he is one of the coaches who should be on the hot seat when the season ends.

The other coach who needs to be replaced has hurt the Yankees in two different decades. In the mid-80’s Bobby Meacham’s anemic bat and awful defense sabotaged the Yankees numerous times. In the present day his freewheeling approach to coaching third has cost them runs at the plate. Through July, the Yankees had 13 runners gunned out at home, among the highest number in the league. Meacham replaced Larry Bowa who was probably the best third base coach in the league and also kept Robinson Cano in line. Cano’s regression cannot be placed entirely on Meacham’s shoulders, but the need for a better job at third and someone who can get Cano going again should lead to Meacham’s demise.

Changes to the staff are just a start of what promises to be a long and interesting offseason for the Yankees.