Making The Call: The Knicks Have A Lot Of Work To Do 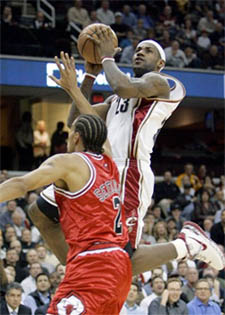 The Knicks’ plan is clear, wait until July 2010 and then sign LeBron James and possibly Chris Bosh or another superstar as well. The problem is there is a lot of work left to be done to realize that plan. The Knicks will enter the 2010-11 season with four players under contract: Eddy Curry, Jared Jeffries, Wilson Chandler and Danilo Gallinari. That gives the Knicks plenty of space under the salary cap, but it is hardly the makings of a good team and that is what is most important to LeBron.

Just this week James said, "When I decide to make the decision, it's going to basically put me in a position where I feel like I can win multiple championships.” So, as much as we want to picture James in a Knicks’ uniform, it is unlikely to happen unless the Knicks can upgrade their roster. Don’t expect LeBron to come into the Garden to rescue a team coming off of a 20-win season, he wants to walk into a good team and make it great.

For the Knicks to meet that criteria they will have to accomplish three things. The first is trading Eddy Curry, which won’t be easy. Curry is due to make over $30 million the next three seasons and he hasn’t set foot on the court yet this season. But, trade him they must because freeing up his salary would allow the Knicks to keep David Lee and Nate Robinson, two players who can help the Knicks win now.

Next, the Knicks need to get a good lottery pick in the upcoming draft and get a player, preferably a guard, who can come in and make an impact from day one. To do that, the Knicks need to lose a lot this year, something that goes against what their coach is calling for. The Knicks do not have a first round pick in 2010 (thanks Isiah) so this upcoming draft is their last shot at the lottery before they go after LeBron
Lastly, the Knicks have to hope that Wilson Chandler continues to develop and Danilo overcomes his back problems and gets on the court. If both turn into good players, the Knicks will have the start of a nucleus that LeBron might be interested in joining.

None of this will be easy, but the Knicks have committed to this path. Donnie Walsh has made a great start, now he needs to finish the job.