Making The Call: Isiah Is Still The Knicks Problem 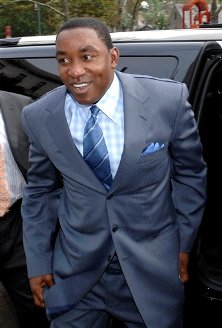 We will probably never know exactly what happened in Isiah Thomas’ house the other night. We know police took a 47-year old man out of there because he had taken too many sleeping pills, but we don’t know that man’s name. We know that Isiah Thomas, who happens to be 47, said that it was his daughter who was rushed to the hospital. We know that Isiah’s 20-year old son concurred with his Dad. We also know that police said he is lying and went even further yesterday when Harrison police Chief David Hall chided Isiah for involving his daughter.

What we do know is that this is just the latest in a string of incidents involving Isiah where the blame is placed elsewhere. It doesn’t seem to matter to Isiah what the evidence may show, Isiah refuses to take the blame. It was less than a year ago that Thomas proclaimed, "As I have said before, I am completely innocent," after the Knicks settled the Anucha Browne Sanders lawsuit.

As revolting as watching that performance was, this is worse. This is a father using both of his children to cover up his mistake. It is the antithesis of being a parent, instead of doing everything to protect his children, he is doing everything to expose them, and even saying his daughter is “down right now”. Hopefully, the children move on with their lives without suffering anymore from this experience.

And that brings us to the final part of this saga, a part we won’t know about, but can only hope happens. It starts with the Knicks taking responsibility for their employee and offering him every type of help and counseling they would offer any other Cablevision employee in trouble. Because no matter how reduced his role, Isiah Thomas is still a member of the Knicks and his actions still reflect on the Knicks. If they want to walk away from that responsibility, they will need to reach a contract settlement with him. If they don’t want to do that, they can’t pretend he doesn’t exist. Isiah is very real and still prone to embarrass himself and the team at any moment.

#anucha Browne sanders
#basketball
#isiah thomas
#knicks
#sports
Do you know the scoop? Comment below or Send us a Tip