Making The Call: Hockey Is Worth A Look 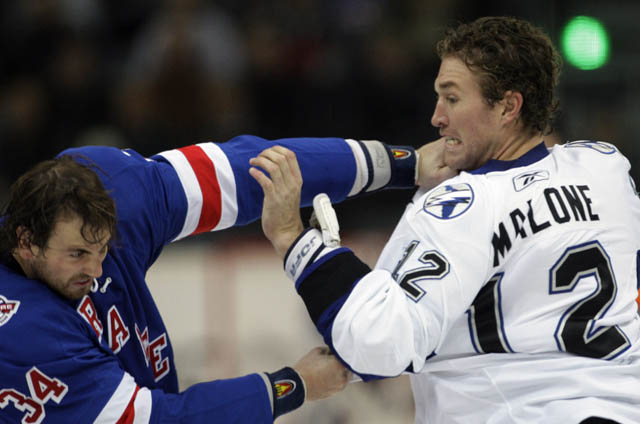 Photo of Aaron Voros of the Rangers and Ryan Malone of the Lightning during today's game in Prague, Czech Republic by AP/Petr David Josek

With baseball over and football only an once-a-week watch, New York sports fans may be staring at an empty October. But, there is a solution that sadly only a small number of fans in the area have found -- hockey.

Take the speed of basketball, add the contact of football and you have an idea of what a hockey game is like. Hockey players routinely play with broken fingers, busted ribs and various other maladies that sideline athletes from the other major sports. In the spring, playoff beards are grown as sixteen teams compete for the best trophy in sports, the Stanley Cup.

Detractors of the sport will say the lack of scoring makes it boring and there are too many arcane rules. Well, scoring is up since the lockout of 2004-05 and while the rules take some getting used to, they are easy to grasp with a little work.

You have three local teams to choose from each with their own distinct history. The New York Rangers were one of the “Original Six” teams that founded the NHL. The New Jersey Devils have won three Stanley Cups in the past 13 years. The New York Islanders were the best team in New York in the 80’s winning four-straight cups.