Making The Call: Dump Him 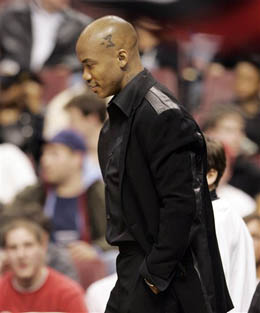 It’s time for the Knicks to take a deep breath, close their eyes and cut Stephon Marbury. Yes, this will entail putting him though waivers and then eating his almost $22 million salary, but they have no other choice.

It is clear that coach Mike D’Antoni doesn’t want Marbury to be part of the team and you can’t really blame him. As talented as he is, Marbury has never been a traditional point guard and his attitude and behavior problems are well chronicled. Leaving him to rot on the bench or inactive list will just cause him to grow more and more poisonous and could disrupt the chemistry of a team trying to start fresh.

If they could trade him, the Knicks would have already, but a trade poses problems too. The Knicks have one goal right now and that is to get under the salary cap in 2010 to take a run at LeBron James or Dwayne Wade. Shedding Marbury’s salary is a big step towards that and therefore the Knicks can’t take back a salary that will jeopardize that plan.

So, their only real choice is to waive him, eat the salary and then watch him sign with another team and earn an extra $1 million by doing so. It’s a sickening end, but it is an end and that is the only way the Knicks can have a new beginning.

#basketball
#knicks
#sports
#stephon marbury
Do you know the scoop? Comment below or Send us a Tip
A new Gothamist is coming! We’ve moved comments over to our beta site. Click here to join the conversation and get a preview of our new website.