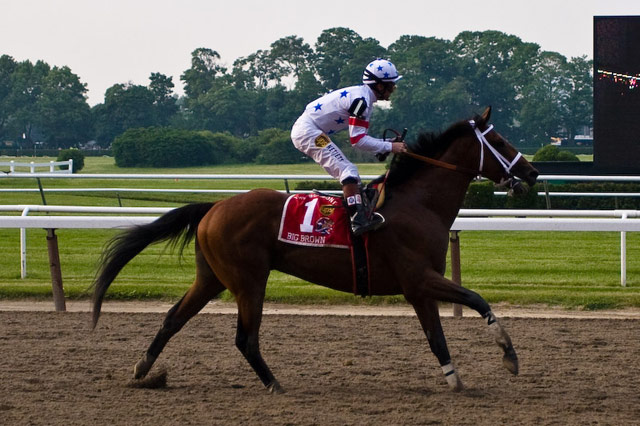 In the end, Big Brown was nothing more than a tease. Rick Dutrow, Jr., Big Brown’s trainer had guaranteed victory before the race, but his horse was unable to complete delivery. Dutrow’s bluster disappeared in the dust of the Belmont track as his horse went from a 1-4 favorite to dead last in a stunning result Saturday.

And, with his loss, Big Brown went from a great horse to the biggest disappointment in sports in recent memory. Consider the scene that developed on Saturday morning, not only was Big Brown the prohibitive favorite, but his only “real” competition, Casino Drive, was scratched because of an injury. Dutrow hadn’t even waited for that fortuitous event to pronounce that the Triple Crown was a "forgone conclusion."

But, his horse wasn’t able to back up his mouth. Maybe it was the lack of steroids. The horse and Roger Clemens both like Winstrol, but Big Brown hadn’t had a shot since April and was considered by most experts to be running clean- unlike his efforts in Kentucky and Maryland. Dutrow was so humiliated after the race that he kept reporters waiting as he searched in vain for an injury to his horse that thankfully didn’t exist. When he finally met with reporters, he tried to blame a phantom injury telling them, "Something has to be not right for him to be pulled up in a race, so I have to try to find out what it is." But the truth is simply that Big Brown wasn’t the equal of Affirmed or Secretariat, he was a fine horse with a trainer who talked too much.

#Belmont Stakes
#Big Brown
#horse racing
#Making The Call
#Rick Dutrow
#sports
#Test of the Champion
#Triple Crown
Do you know the scoop? Comment below or Send us a Tip