Making The Call: A Must-Win for Jets 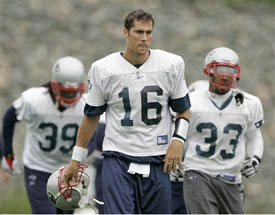 Let’s face it, the minute the Jets traded for Brett Favre, today’s game became one you circled on the calendar. It was going to be a measuring stick to see exactly how good the Jets really were. Play a competitive game against the Patriots at home and you would feel that the trade was worth it. That all changed in the first quarter of last week’s Patriots game. As Tom Brady limped off the field, Jets’ fans started to see today’s matchup differently and they should. Today’s matchup has gone from a measuring stick to a must-win.

Matt Cassel, Brady’s replacement has been a backup to the stars. At USC, he backed up Carson Palmer and Matt Leinart. In New England he has served as Brady’s backup. As a result he has thrown less than 100 passes in game conditions since leaving high school. Yes, the Patriots haven’t lost a regular season game since December 10th, 2006, when they were shutout by the Dolphins, but they had Tom Brady under center for all of those games. Now they start Cassel who draws the Jets at the Meadowlands in his first start in seven years.

That’s what makes this a must-win game. The Jets have a chance here to change the balance of the AFC East and the entire conference. The Chargers and Colts both lost their openers; the Patriots are missing their most important player. New York can send a message today that they are legitimate Super Bowl contenders. This is an opportunity they cannot afford to miss.