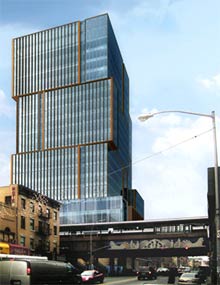 Ever since real estate developer Vornado revealed plans for a boxy, glassy skyscraper at 125th Street and Park Avenue last March, people were curious what might companies might lease some of the 640,000 square feet. Now the NY Times reveals Major League Baseball will take a swing at starting its cable network in the building. Wow.

The 21-story building, dubbed Harlem Park, would be Harlem's "first prime office to be built" in the neighborhood "in more than three decades" according to the Times. MLB would rent one-fifth of the building, including floors for studios, editing suites, executive and sales offices. Apparently MLB had looked at space all over Manhattan, Queens and NJ and were attracted to Harlem because rents are half of what they are in Midtown and tax breaks are offered to tenants.

There's guarded enthusiasm for the project from the community, which is the middle of the city's push to rezone Harlem (the city wants to build taller and denser buildings; Harlem Park would need a zoning exemption). As Community Board 11 chairman Robert Rodriguez told the Times, the project is "exciting" yet "As a community, we recognize how an office development could add vibrancy to the surrounding community. But we remain concerned about how this development proceeds and about jobs for local residents.”