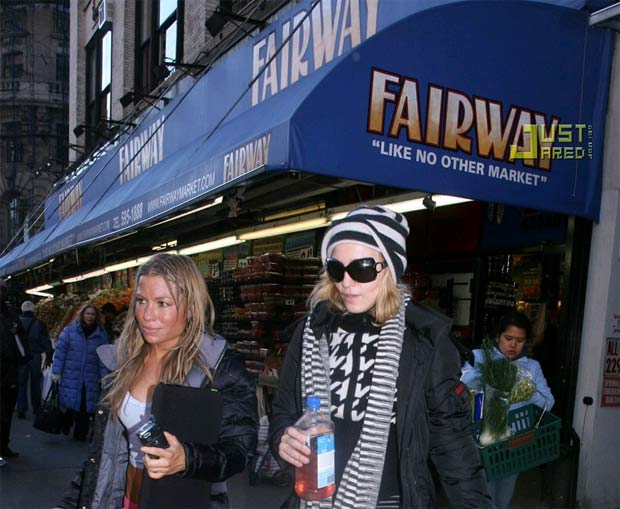 It's all in an Upper West Side day for the Material Girl! The tabloids have reported that Madonna is suing her co-op, claiming the board blocked her attempt to buy a neighbor's apartment. Madonna has a 6,000 square foot apartment at Harperley Hall at 41 Central Park West - a duplex with hair salon and gym. The summons filed in Manhattan Supreme Court accuses the board and Midboro Management of "breach of contract...and orders the transfer of 868 co-op shares to the singer." Co-ops - so complicated!

Just Jared had photographs of Madonna leaving her dance studio, Steps on Broadway, which amused us because it's located right above Fairway and we can't imagine her stepping in to brave the insane crowds there (maybe her chef does, if they have a Kabbalah section). People magazine reports that Madonna's dance session with her instructor ran 15 minutes long, inconveniencing a group of young students, so, as an apology, Madonna and her instructor decided to teach the girls some moves. That sounds fun and scary - Madonna as dance teacher reminds us of Debbie Allen's tough dance teacher in Fame.

And the rumor is that Madonna's next album is either called Licorice or Give It To Me. One fan site claims that Kanye West is on the album, too.