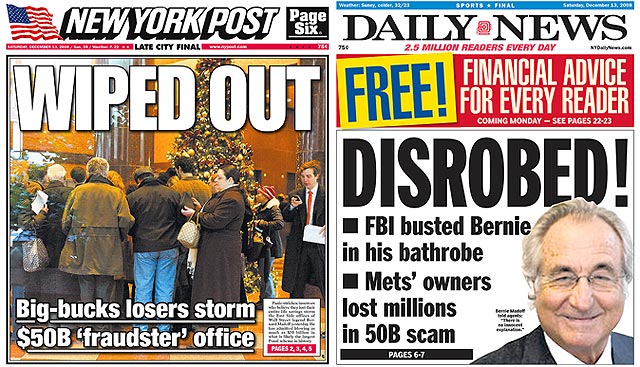 It may be impossible to overstate how extensive Bernard Madoff's apparently fraudulent investing seems to be. The 70-year-old investor, who admitted that he had essentially been running a "giant Ponzi scehme" (moving clients' money around to pay clients) while clients thought they were just investing with an unbelievably reliable hedge fund, said he believed the fraud to be around $50 billion. Bloomberg News has a good summary of how Madoff, a Brooklyn boy made good, unraveled (he was under a lot of stress, according to the criminal complaint, before his confession) and here are few quotes that just scrape the iceberg of the insanity:

Bottom line: No one was really paying attention while they made money, in spite of red flags. Back in 1999, Harry Markopoulos, working at a rival firm, said, "Madoff Securities is the world's largest Ponzi Scheme," and even, the WSJ reports, "pursued his accusations over the past nine years, dealing with both the New York and Boston bureaus of the SEC, according to documents he sent to the SEC reviewed by The Wall Street Journal." But the SEC closed their investigation in 2007.

And the WSJ's Jason Zweig has a column on how Madoff made people look dumb: "The accounts managed by Bernard L. Madoff Investment Securities LLC reported gains of roughly 1% a month like clockwork, with nary a loss, for two decades. Why did that freakishly smooth return not set off alarms among current and prospective investors? Of all people, sophisticated investors like Mr. Madoff's clients should know that if something sounds too good to be true, then it's not. But they believed it anyway. Why?"

#Bernard Madoff
#billions
#fraud
#hedge fund
#Madoff Securities
#ponzi scheme
Do you know the scoop? Comment below or Send us a Tip