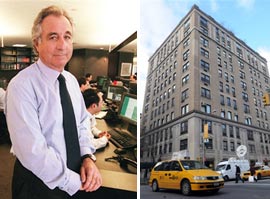 As investigators continue to look into the $50 billion Ponzi scheme that investor Bernard Madoff was running, what's interesting to note that Madoff's dealings affected the super-wealthy to the just plain-old mom-and-pop savers. Madoff (pictured, with his Park Avenue apartment building at right) was arrested after he admitted to employees (including his sons) that his successful investment firm was a "big lie" that he had used investments from clients to pay returns to earlier clients.

The NY Times reports that Mets owner and real estate investor Fred Wilpon, through his firm, "entrusted Madoff with hundreds of millions of dollars to invest... Although it is unclear how much money Wilpon may recoup, any significant financial loss by a team owner raises questions about how those losses may affect the franchise."

On the other hand, there's retired carpet salesman Arnold Sinkin, who, with his wife Joan, saved their money and had invested with Madoff. The couple, in their 70s, told the Daily News they lost 85% of their life savings; Joan Sinkin said, "Nobody in our lives gave us anything. We worked hard for every penny that we had." Another victim, Joyce Greenberg, told the Post that she received official-looking statements from Madoff detailing stock transactions, "The point with him was that I always got every document. If you get all the documents, you are not suspicious."

Clusterstock has a list of victims mentioned so far—there's the big hedge fund that had $7.3 billion with Madoff, Banco Santander (3 billion Euros worth of exposure), and then families who had hundreds of thousands with Madoff. Clusterstock's Henry Blodget has a piece in the Post noting key factors for why no one really questioned Madoff, including how he "never promised (or delivered) huge returns," his clients (thrilled with the returns they got) told their friends or associates to invest with him, and clients may have thought he was cheating with "front-running"—an illegal scam that does make money (versus it being a Ponzi scheme).

A lawyer who filed a class-action suit against Madoff told the Post, "It's overwhelming. We have been interviewing people from as far away as Argentina, London - of course, Palm Beach and the New York area - up and down the Eastern seaboard, and out West." And Bloomberg News reports that the SEC didn't investigate Madoff's firm "after he subjected it to oversight two years ago," (some suggest the SEC doesn't have the resources for this kind of investigation of a recently registered firm) and adds, "Any suspicions about Madoff may have been dampened because of his association with industry groups, watchdogs and politicians."

#Bernard Madoff
#billions
#fraud
#hedge fund
#Madoff Securities
#ponzi scheme
Do you know the scoop? Comment below or Send us a Tip