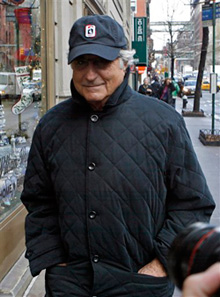 It probably would have been more surprising if the life of Bernard Madoff, who admitted to fleecing countless investors in an estimated $50 billion Ponzi scheme, wasn't being threatened. According to the Daily News, a source "who knows several of Madoff's affluent victims" said, "Bernie has been told that if he doesn't cough up every dime he has hidden in offshore accounts, someone in his family will be killed." Another source adds "at least one of the threats was aimed solely at Madoff, and that the matter was referred to the FBI."

Madoff's wife Ruth, who co-signed her husband's bond (the other co-signee was his brother Peter), is being investigated by the Securities and Exchange Commission. The SEC is examining whether she helped her husband maintain records for the scheme. The couple put up their $7 million East 64th Street apartment plus their homes in Montauk and Palm Beach for the bond.

Speaking of real estate, the NY Times and Observer focus on how the Madoff scam has left the real estate industry in a tailspin. One lawyer representing 10 developers and investors tells the NY Times, "The level of devastation, both financial and on a human level, is astounding," while an anonymous real estate owner fumes to the Observer, "I wish I could get my hands on him. I didn’t have all my money in there, but enough that it hurts. How does he sleep at night? How did he ever fucking sleep at night?” In fact, the only people who spoke on the record were lawyers or developers who didn't invest with Madoff!

Vanity Fair's Moe Tkacik offered this gem on what former Governor Eliot Spitzer thought of the matter: When someone joked, "Bernie Madoff was worse for the Jews than anyone since David Berkowitz,” Spitzer retorted, “Well, I was New York’s second Jewish governor and look what I did.”

#Bernard Madoff
#hedge fund
#investment
#ponzi scheme
#trading
#victims
Do you know the scoop? Comment below or Send us a Tip