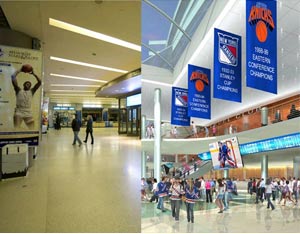 A week after abandoning plans to build a new arena at the planned Moynihan Station, Madison Square Garden officials revealed $500 million plans to renovate the 40-year-old space. Cablevision--which owns MSG--vice chairman Hank Ratner told reporters that though the company supports Moynihan Station, "We are going to renovate the arena here, and we are not going to be moving...We can accomplish anything we want by renovating." Well, Cablevision probably does like those tax breaks.

The plans call for extensive interior changes, such as a new entrance to the arena, widening concourses, and 50% more space for bathrooms, to transform MSG from dingy and claustrophobic to roomy, airy and pleasant. Murray Benyon of Canadian architecture firm Brisbin Brook Beynon noted the amount of seats would stay the same, but the grade will be raised 17% to improve sightlines.

WNBC's Jay DeDapper reports luxury suites will be "brought down from the rafters to a more suitable mid-level position and "another 20 will be situated just below floor level at courtside allowing those with prized courtside/rinkside seats to have direct access to their own little party place just steps away." There will also be a restaurants and bars "cantilevered over the stands" and a VIP club where, per AP, "customers [can] shout out to athletes as they walk into the arena and back to their locker room."

All the work is to be done during the summers so the Knicks and Rangers games aren't interrupted, starting next year and completed by late 2011. The exterior isn't changing (yet) and since the building will occupy the same footprint, MSG won't need to get as many permits for the work.

#cablevision
#knicks
#madison square garden
#msg
#rangers
#renovation
#sports
Do you know the scoop? Comment below or Send us a Tip
A new Gothamist is coming! We’ve moved comments over to our beta site. Click here to join the conversation and get a preview of our new website.