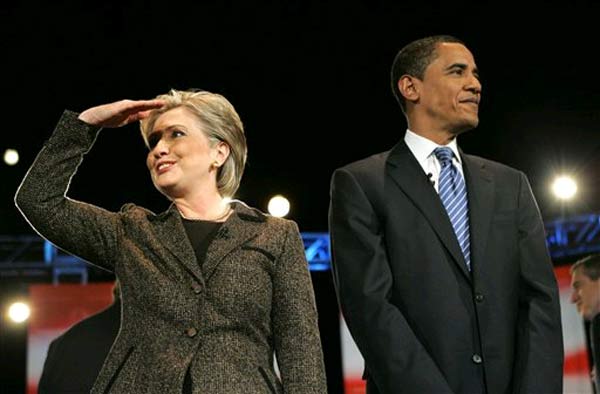 Hillary Clinton's campaign happily announced that the Senator from New York had raised $35 million during February, her best month ever. Adviser Harold Ickes used the news to accentuate the positive, "We have been through a dry period in the last eleven contests but we are about to start our upswing." Clinton is thrilled with the fundraising efforts, saying, "It’s incredibly gratifying to see people coming forward with their vote of confidence." She also said her $5 million personal loan to the campaign was not paid back.

Still, the $35 million for Clinton is good news, as it gives her campaign the money to continue to fight for Texas, Ohio, Vermont and Rhode Island, which have primaries next Tuesday. Previously, there were concerns Clinton's campaign coffers could be near empty, as fundraising never kept up with Obama's pace (he raised $36 million in January to her $14 million). His flush campaign has been able to buy "choice real estate" in TV media, buying spots during American Idol in the four March 4 primary states.

And while Obama is sitting pretty with all these millions, his earlier promise to only spend, if nominated, "$85 million available in public financing between the convention and Election Day," is giving Republican frontrunner John McCain another reason to attack him. Obama had said during the debate, if nominated, he would work something out with McCain"that is fair to both sides." But McCain said, "The fact is, Senator Obama signed a piece of paper and pledged to take public financing for his campaign if I did the same. I believe that Senator Obama should keep his commitment also, which means taking public financing."