Macy's Will Build Skyscraper On Top Of Herald Square Flagship

Its first quarter earnings were stronger than expected, and retailing behemoth Macy's is looking to capitalize even more with its valuable real estate. The company has confirmed an April Bloomberg News story that said Macy's was looking to build an office tower on top of its iconic Herald Square flagship location.

"We hope to walk out of 2019 with a plan that we’re then going to bid out," Macy's CEO Jeff Gennette told Bloomberg, adding this has been in the works for a year and a half.

Traditional retailers have been facing headwinds, like online sellers and fast retailing, and Macy's has responded by both closing stores and attempting to innovate, creating a new format of stores, called "magnet stores." But one retail industry observer told the Wall Street Journal, "The other [traditional] stores are dispiriting and crammed with stock. That is the issue that Macy’s has got to get to grips with." 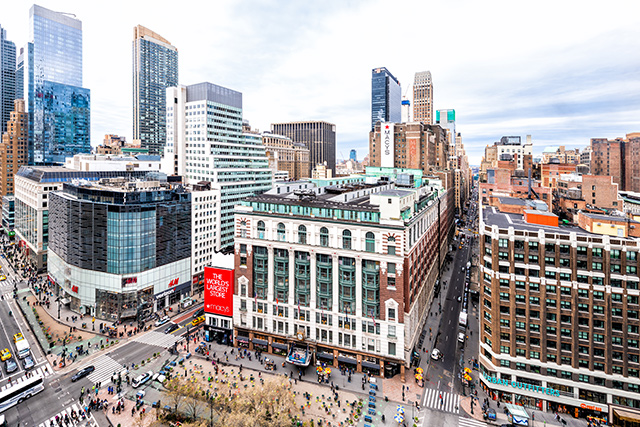 According to the original Bloomberg News story, "The company has floated plans for a 1.2 million-square-foot (111,500-square-meter) office tower that would be used by other tenants, according to a person with knowledge of the matter. Macy’s probably would push for zoning changes around its property to allow for the 800-foot (244-meter) building, which would bring an estimated 6,000 additional people to the area, said the person, who asked not to be identified because the talks are private. The plans are exploratory and may change."

Macy's has apparently been talking to NYC officials about the plan as well. Two years ago, Macy's floated the idea of adding a roof deck to the Herald Square store to increase foot traffic. At the time, a Macy's real estate executive said that others in the real estate industry told them constantly, "We love this piece of real estate, how do we get a piece of it?"

Fun fact: The shopping bag at the corner of Macy's Herald Square store was (is?) originally a "spite building". Ephemeral New York had explained eight years ago, "Macy’s had a verbal agreement to buy a plot at the corner of 34th and Broadway. But an agent acting on behalf of rival department store Siegel-Cooper scored the plot instead. Reportedly the agent wanted Macy’s to give Siegel-Cooper its 14th Street store in exchange for the land at 34th Street. But Macy’s wouldn’t have it. The store was built around the plot."

#herald square
#macy's
#real estate
#retail
Do you know the scoop? Comment below or Send us a Tip
A new Gothamist is coming! We’ve moved comments over to our beta site. Click here to join the conversation and get a preview of our new website.