Machetes and Knives Out in Williamsburg 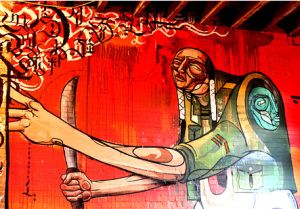 Earlier in the week, unconfirmed reports of a knife-wielding assailant had Williamsburg residents on edge; South Williamsburg in particular has been flooded with patrolmen all week, and we’ve heard from readers who say they’ve been written summons for minor offenses like jaywalking.

Though the 90th Precinct and the NYPD press liaison are unforthcoming about the dragnet, two officers walking their beat by the future Pies ‘n’ Thighs location on Driggs and South 4th Street told us the increased police presence was in response to a spate of machete-wielding gang violence. Again with the machetes, New York? Any more incidents like this and we may as well add a machete to the city’s seal, and lose "Sinister the Indian's" bow. The officers also said there has been a steady rise in gang activity in Williamsburg in the past few months.

And the trusty Brooklyn Paper police blotter, which is never a good source for peace of mind, reports that muggers have indeed been feeling kind of stabby this month, though no machetes were sighted.

You've at least got to hand it to the marketing team who dreamt up the concept for Williamsburg's new high rise condo development, The Edge; they've totally got their fingers on the pulse.