Lynne Patton Continues NYCHA Stay, Where Some Tenants See Her As A 'Saviour'

On a cold Monday afternoon last month, Lynne Patton, the U.S. Department of Housing and Urban Development regional administrator, wheeled a black suitcase with her belongings before a phalanx of cameras. She was temporarily moving out of her apartment in Trump Tower and into New York City Housing Authority.

“A lot of people on social media have said you don't need to move into NYCHA to fix NYCHA,” she said, before moving into the first complex, the Patterson Houses in the Bronx, with a host family. “I don't disagree, but it helps.”

Patton, who is black, has received national attention after appearing during the Michael Cohen hearing before Congress last week to counter claims that President Donald Trump is racist. She has vehemently denied that she was used as a prop. The HUD’s Office of Inspector General has since said that it is reviewing her appearance and has referred the matter to the U.S. Office of Special Counsel.

Never played “hooky.” 🙄 Spoke to GC’s office, Chief of Staff & WH Comms Tuesday evening to advise of invitation & seek protocol. I was also 100% unpaid on Wednesday & am reimbursing for partial travel, per my own insistence. My participation was on personal time & capacity. 🤷🏽‍♀️

In New York, Patton’s month-long stay in NYCHA has drawn media attention not seen since her appointment in 2017 raised questions. Unlike her predecessors, she had no housing experience and came to the position after working as an aide to the Trump family. Public housing advocates and local politicians have dismissed Patton’s stay as a publicity stunt. But many public housing residents, who say City Hall has for too long neglected the conditions they struggle with every day—lead paint issues, mold, heat and hot water outages, vermin infestations—have welcomed her in the hopes she’ll facilitate an improvement.

At Patterson Houses in the Bronx, the complex where she spent her first week, Patton slept on an inflatable bed in the family’s living room, played Fortnite with her host’s young son, sweated through an aerobics class and visited distressed apartments.

“I’m glad that she came here to bring some attention to the situation that we living under,” said Tyshon Thompson, 45, who’s lived all his life in Patterson. “If that attention is going to make them regulate and straighten this out, then so be it.” 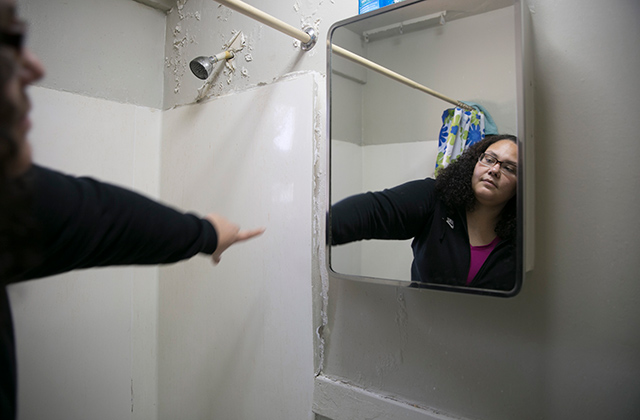 One of the main reasons the housing authority is in a state of deep disarray today is because the federal government has been decreasing funding for nearly two decades. In January, the city committed to spending $2.2 billion over the next 10 years to improve conditions, following a federal prosecutor’s investigation that found NYCHA had failed to provide safe and sanitary housing and its employees lied to federal inspectors to cover up the failures. The federal government didn’t promise an increase in funding.

But when a few dozen residents crowded into a room with teal-painted walls at Patterson’s community center to hear her talk, Patton suggested it was time to stop looking back.

To Patton looking into the future meant inspecting what NYCHA’s leadership, appointed by the Mayor, does with the funds it already gets from the federal government.

“We give NYCHA $30 million dollars per week,” she said. “Where is that money going?” 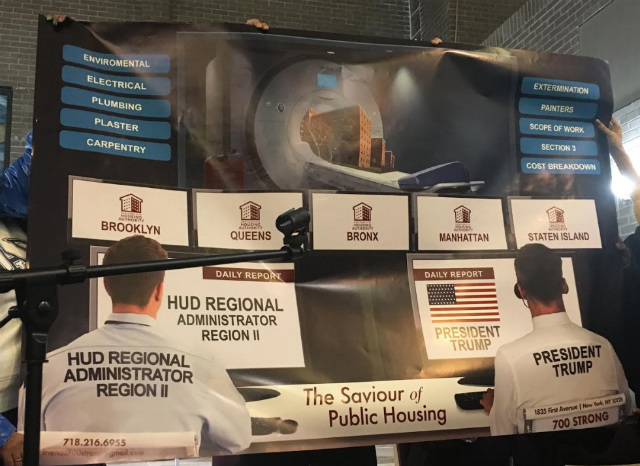 Patton said a federal monitor recently appointed by HUD as the result of the January agreement will oversee the city’s spending and bring about change in conditions at NYCHA (later on Twitter #ChangeIsComing). But the meeting turned raucous as a few young men challenged her.

“What change?” one man shouted. “Elevator still pissy right here, in the building you in.”

The man berated Patton for choosing to stay in a well-maintained apartment, unrepresentative of most.

“We went to a ton of shithole apartments,” she countered, echoing the language President Trump once reportedly used to describe developing countries.

Patton’s foray into public housing has enabled her to get closer to the president. He saw her on “Fox & Friends”—one of his favorite shows—talking about her stay at Patterson. A week later, he praised Patton’s performance (“great”) while dissing Mayor Bill de Blasio (“[he’s] done a terrible job with public housing”).

Some NYCHA residents have begun echoing the sentiment. Jonathan Newkirk, 53, came to the meeting Patton held in a church on the Upper West Side with residents from the Frederick Douglass Houses, where she spent her second week. (She’s moving into the Queensbridge Houses on Monday.) Newkirk described the conditions some of his neighbors live in as “inhumane,” and put the blame squarely of Mayor de Blasio’s shoulders.

“First and foremost, it's the city's responsibility,” he said. “It's on nobody, but the mayor right now.”

Residents cheered on Patton’s catchy one-liners (“Less people with white button-down shirts, more people with button up coveralls”). A few tenant leaders came up and spoke, identifying themselves as Democrats, but criticized the Mayor. A banner made by a tenant group appeared to show NYCHA buildings undergoing a CT scan. It said Patton and President Trump are the “Saviour” of public housing.

Update 3/5/19: A previous version of this story was inaccurately headlined: "Lynne Patton Wants To Be The 'Saviour' Of NYC's Public Housing." The headline has been changed to emphasize that a tenant group sees Patton as their "saviour," not Patton.

#ben carson
#Lynne Patton
#nycha
#original
Do you know the scoop? Comment below or Send us a Tip