Are YOU concerned about the fast-approaching L train shutdown, the overnight displacement of hundreds of thousands of daily commuters, the likelihood of system-wide spillover effects and the potential for paralytic, bus-stiflling congestion caused by the attendant rise in private vehicle use? Well, don't be. Because as of today, there is a new L in town—and unlike that dull and storm-ravaged original version, the L 2.0 is millennial-pink, luxurious, hassle-free, and also a van.

Created by some intrepid Brooklynites, the freshly disrupted jitney bills itself as the only service "exclusively focused on solving for the L Train shutdown." For just $155 each month, "The New L" subscribers get access to "luxury shuttles driven by professional chauffeurs," plus wi-fi, breakfast bars, phone chargers, and the sense of accomplishment that comes with hacking the greatest transit headache of our generation. Or at least, one half of that headache— the price tag only covers a Manhattan-bound ride, so you're on your own getting home. Still, a sleek website assures that it is, in fact, #WorthIt. 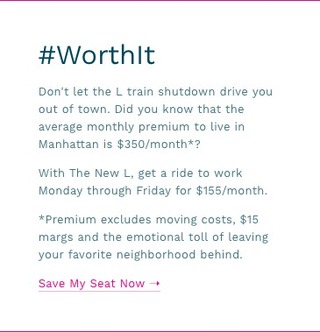 Of course, this isn't the first startup to transform the concept of carpooling into a lifestyle brand, while pitching it as a viable alternative to a system that transports 225,000 riders daily between Brooklyn and Manhattan (and thus giving us no choice but to blog angrily). Say what you will about the starry-eyed fever dream of the East River Gondola, at least the proposal was somewhat original.

But the main difference between "The New L" and the Bro Buses that came before it, is that this time around we have a much clearer idea of how the MTA and Department of Transportation are preparing for next April's year-long shutdown. In addition to expanded bus routes and minor increases in subway service, that contingency plan calls for a partial car-ban in the core of 14th Street, along with HOV-3 restrictions on the Williamsburg Bridge, from 5 a.m. to 10 p.m.

Notably, the plan does not call for a dedicated bus lane on the bridge or for a permanent busway on 14th Street, nor does it explain how the restrictions will be enforced. The worst-case but entirely plausible scenario, transit planners warn, is that displaced riders will become frustrated with alternative subways options and turn to private vehicles, forcing buses—the key to making this plan even remotely tenable—to contend with gridlock hell. It's this precise race-to-the-bottom that could swiftly turn major thoroughfares into "bus parking lots," said Annie Weinstock, a transportation planner and President of BRT Planning International, earlier this year.

In other words, "The New L" train will likely not end up helping anyone, and is premised on an idea—that non-rapid-transit motor vehicles can provide a worthy substitute to mass transit—which could very quickly turn an already precarious situation into what the Rider's Alliance Danny Pearlstein calls a "nightmare L-pocalypse scenario."

Or, as Weinstock told us on Thursday, "Displaced L Train riders who turn to private vehicles will only contribute to increased traffic congestion. Commute times will go up, local air pollution will go up, and the L Train problem won't be solved."

#a new l in town
#dot
#l train
#l train shutdown
#MTA
Do you know the scoop? Comment below or Send us a Tip
A new Gothamist is coming! We’ve moved comments over to our beta site. Click here to join the conversation and get a preview of our new website.