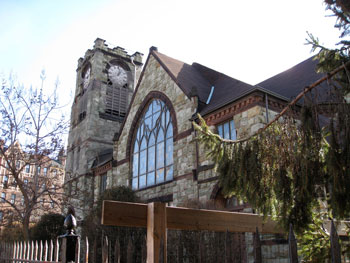 As we all learned from the 1982 film Poltergeist, it is never a good idea to build anything over a burial ground. Seems even developers took this warning to heart, as one just removed 211 bodies from a graveyard that's in the way of their sweet new luxury condos. The NY Post reports:

A Brooklyn church yesterday cleared out the remains of 211 corpses that had been buried for more than a century in an adjacent crypt to help pave the way for a controversial luxury condo complex.

The 109-year-old United Methodist Church in Bay Ridge is under contract to sell its church and grounds along Fourth Avenue for $9.75 million to developer Abe Batech, who wants to replace it with a six- to seven-story condo project.

Demolition is slated to be done by the end of May, but protesters are now up in arms over the eerie excavation. The 211 old "residents" of the address have been moved to Cypress Hills Cemetery; but will any future residents dare sign a lease on what's certain to be a haunted condo?

Photo of the United Methodist Church in Bay Ridge via allwaysny's flickr.