Residents of a luxury condominium in DUMBO have a new perk: velvet ropes that have been spotted blocking the curb and a fire hydrant near the building's entrance. Condo members tired of jockeying with taxi drivers for loading space in front of 100 Jay Street can now call the front desk ahead of dropping off the kids and groceries, to have the doorman come out and roll it away.

"I find it hilarious," said resident Harris Damashek, 40, a Creative Director at Anheuser-Busch who's owned an apartment in the 33-story building since it opened in 2007. "It's like coming home to a red carpet event."

"It's been a nuisance since the green taxi program went into effect," Damashek added. "The front of our building has become an unofficial green taxi parking line, which is great when you need [a cab]. But when you want to drop things off in the building you end up in a dangerous situation."

Damashek added that the policy has been in the works "for a good long time," and is the result of a building-wide survey. For long term parking, the building has its own garage. The hydrant in question is on Front Street, near the corner of Jay.

The velvet ropes, which weren't in place on Friday morning, were spotted by DUMBO resident Christopher Frank shortly after 5 p.m. on Wednesday, and just after noon on Thursday. "It's very un-New York to save spots, and to have a velvet rope left a bad taste in my mouth," he said on Friday.

First of all, NYC's parking regulations prohibit parking, standing or stopping within 15 feet of a fire hydrant, punishable with a $115 fine. By the books, 100 Jay Street's "Reserved Parking" sign is completely illegal.

That said, a passenger vehicle is allowed to stand in front of a hydrant as long as it's daytime and the driver "remains behind the wheel and is ready to move the vehicle if required to do so." The scenario applies to most taxi drivers who line Front street between Pearl and Jay streets (this reporter counted five green taxis end-to-end on the Front Street block in question this morning, idling and inching towards Jay Street).

Depending on how many helpers you have unloading Whole Foods bags from your trunk, the law probably covers most drop-off scenarios as well. 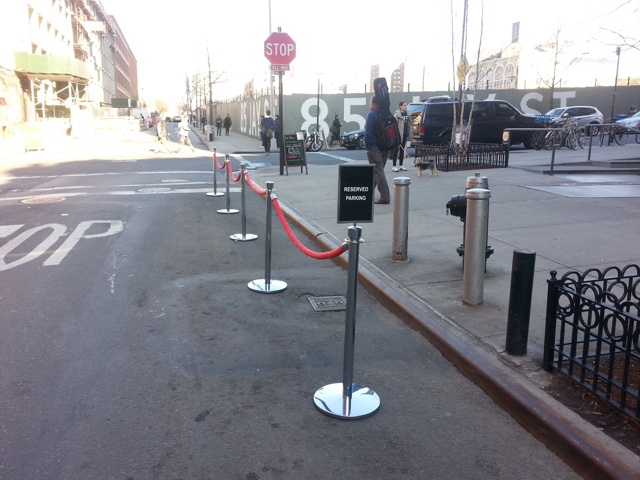 The rope on Wednesday, around 5:15 (Christopher Frank).

Idling, also, is technically illegal. New York City requires stationary drivers to cut their engines after three minutes, or one minute in a school zone. First violators get a warning and subsequent violations trigger a $220 fine. Legislation introduced last year would up the fine to $350, and empower civilians to submit video evidence of violators, in return for as much as half of the fine amount. But in the meantime, enforcement is lax. Only 209 summonses were issued in 2014 for idling, according to bill sponsor Donovan Richards.

Frank filed two complaints with 311 this week about the velvet ropes, and both complaints were dismissed with the following official response: "The Police Department responded to the complaint and determined that police action was not necessary."

We sent a photo of the scenario to the Department of Transportation, which confirmed that it was aware of the situation and investigating—both the alleged illegal idling and the legality of the velvet ropes.

100 Jay Street's management company, Solstice Residential Group, did not immediately respond to a request for comment.

Mutasim, a green taxi driver, was idling on Front Street on Friday morning. He said that he picks up from 100 Jay every day, taking residents into Manhattan. Mutasim saw the velvet rope on Wednesday and Thursday. "The sign said 'special parking,'" he recalled. "We have to go behind it. It makes it more difficult to pick up."

"All the [taxi] companies pick up here," he added. "I believe it's illegal and it's fighting us in our business."

Shehzad Khaman, another green taxi driver, hadn't seen the velvet ropes, but reiterated that the corner was a popular pickup site. "Most of our customers are in this building, and 80% of them go to Wall Street," he said. "I usually do three or four trips in a morning."

In the case of a fire emergency, Damashek isn't concerned. "I'm pretty sure the fire engine would just roll up and roll over the rope," he said.