A Jewish woman from Brooklyn has filed a federal lawsuit against the all-women's gym chain Lucille Roberts, alleging that she was repeatedly harassed by employees at two of the gym's Brooklyn locations for wearing a knee-length skirt that adhered to Orthodox Jewish rules of modesty.

Yosefa Jalal says that she was ejected from a kickboxing class because of her skirt on July 1st, under threat of police intervention. That day she posted on Facebook, "I went to join a class that was going on and ten minutes into it the lady at the desk came up and told the instructor to stop the class unless I took off my skirt. I refused so she stopped the class."

Court papers detail that, "angered by the class interruption, other Lucille Roberts patrons began to get frustrated with Ms. Jalal. They told her: 'just take it off.' Some participants screamed at Ms. Jalal." An employee then told Jalal that police were en route. Jalal quickly left, and soon received a letter terminating her membership.

"All I want is to work out and take classes like everyone else," Jalal said in a statement. "It isn't fair for Lucille Roberts to target me because I'm Jewish."

A Long Island native and elementary school teacher studying for an education Masters at Brooklyn College, Jalal was a regular member of Lucille Roberts from the fall of 2011 until this summer—first at the gym's Bay Shore location, and later at its Kings Highway and Flatbush outposts.

According to court papers, Lucille Roberts' stated mission is to "provide strong, sexy and confident women with a place they can call their own." Although the gym maintains a dress code, and discourages flannel, denim, and "street clothes," it does not formally prohibit skirts. The gym does, however, put a premium on appearances. From the Code:

This may be a ladies gym but you should still look your best. Studies show you workout longer, faster and harder when you have on a nice outfit. Studies also show you’re 75% more likely to run into your ex on a day where you wear embarrassing sweatpants and a stained t-shirt. 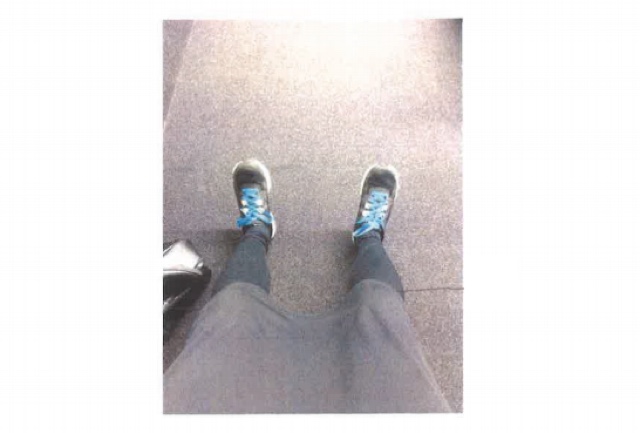 Jalal in her skirt (via Emery Celli Brinkerhoff & Abady, LLP)

The lawsuit alleges that Jalal was first harassed in October 2013, when a manager at the Kings Highway location approached her while she was on the elliptical machine and allegedly "shouted" that she couldn't wear the skirt.

For a full year after that encounter Jalal attended the gym regularly, in a skirt, without incident. However, the following October another Kings Highway manager asked Jalal to remove the skirt, and instead wear a "long t-shirt." When she refused, Jalal was told to leave the gym. This prompted her to attend Lucille Roberts' Flatbush location, where, in June, she was accused of "trespassing" for working out in her skirt. Assured by an NYPD officer that she was not, in fact, trespassing, she continued to frequent the Flatbush gym—until the kickboxing incident in July.

According to the lawsuit and multiple comments on Jalal's Facebook wall, other Jewish women have undergone similar harassment at Lucille Roberts. "I was also told this at the Lucille on Flatbush Ave that I wasn't allowed to work out with my skirt over my leggings so I left," wrote one commenter on July 1st. "Same thing happened to me at Lucille Roberts... Since when is wearing a skirt illegal??" wondered another.

"A half century after the Civil Rights Act of 1964, we still have a company discriminating on the basis of religion," Jalal's attorney Ilann Maazel said in a statement. "The repeated harassment by Lucille Roberts is inexplicable and indefensible."

In addition to damages, Jalal is suing for her re-admittance to the gym with a full membership, and explicit permission for all observant Jewish women to wear knee-length skirts at Lucille Roberts facilities.

Lucille Roberts' attorney Maria Patrizia Zucaro did not immediately respond to a request for comment.

Here at Lucille Roberts we take the safety of our members very seriously. Our decision to uphold a dress code policy, consistent with industry standards and our equipment manufacturers, is not an attempt to hinder any personal religious beliefs. Lucille Roberts is dedicated to providing a safe and healthy exercise environment for all our members.

#jewish modesty
#kickboxing
#Lucille Roberts
#Religious discrimination
#original
Do you know the scoop? Comment below or Send us a Tip
A new Gothamist is coming! We’ve moved comments over to our beta site. Click here to join the conversation and get a preview of our new website.