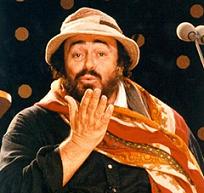 The world's sultan of song, Luciano Pavarotti, died at 71 from pancreatic cancer early this morning. He was at his home in Modena, Italy -- where he was born in October of 1935.

Last summer he was in New York for surgery and hadn't made any public appearances since then, apparently retreating to Modena afterwards. The AP received the following email statement from his manager: “The Maestro fought a long, tough battle against the pancreatic cancer which eventually took his life. In fitting with the approach that characterized his life and work, he remained positive until finally succumbing to the last stages of his illness.”

The legendary Italian operatic tenor was arguably the most recognizable and popular amongst the Three Tenors. Placido Domingo and José Carreras never seemed to gain his celebrity status -- known not only by the opera world, but also by the pop culture minded (The NY Times actually refers to him as "a titan of pop culture"), this crossover helped bring the Opera to the masses.

Pavarotti kept an apartment on the Upper West Side and often referred to The Met as his home. It was, after all, the place where he famously first sang nine high C's in succession in 1972, turning him into an international superstar and gaining him the nickname the "King of the High C's". He also gave his last performance in an opera at The Met on March 13th, 2004 -- a night where he received a 12-minute standing ovation for his role in Puccini's Tosca.

The NY Times has much more on the life of this legend, here.