Lower East Siders and community leaders gathered outside 45 Rivington Street on Wednesday morning to protest its imminent conversion from a nursing home into 100 luxury condominium units, and demand that Mayor de Blasio compensate the neighborhood for what they perceive to be at best a massive governmental oversight, and at worst an example of real estate interests exploiting their connections to City Hall.

Until the fall of 2015, 45 Rivington Street was under a deed restriction that required it remain a nonprofit residential healthcare facility "in perpetuity." The 118-year-old building on the corner of Forsyth Street served first as a public school, and then, for decades, as a nursing home for AIDS patients.

That restriction was lifted in November 2015, so quietly that many local leaders say they knew nothing of it. Last December, the Department of Citywide Administrative Services (DCAS) confirmed to the Lo Down that the building's then-owners, a for-profit nursing home provider called Allure Group, had paid the city $16.15 million to lift the deed. In March, China Vanke Co., the largest real estate developer in China, closed a $116 million deal on the property with Slate Property Group and Adam America Real Estate.

"The whole notion of a deed restriction is that a luxury housing developer doesn't swoop in and take the property away from the community," said Borough President Gale Brewer on Wednesday, noting a shortage of nursing home facilities in the LES.

The Mayor could replace the 200 lost nursing home beds with a new community center, she argued, or new hospice, shelter, or supportive housing beds.

Mayor de Blasio has denied that he was aware of any inter-agency agreements that facilitated lifting the deed restriction on 45 Rivington. According to Mayoral spokeswoman Karen Hinton, the lifting of such a restriction is only necessarily brought to the attention of the Mayor's Office of Contract Services general counsel, which signs off on such decisions in a "very pro forma way."

According to Deputy Mayor Anthony Shorris, those with knowledge of the deal in the Mayor's office had been led to believe that the building would become a for-profit nursing home once it was out from under City-imposed restrictions. "The city was as disappointed as local residents to [learn] that the property would no longer provide needed health services," Austin Finan, a Mayoral spokseman, told the Wall Street Journal last month.

De Blasio told reporters this week that, "If they [members of my administration] had informed me [of the agreement] I would've said 'don't do it.'"

But Community Board 3 Chair Gigi Li said on Wednesday that she sent a letter to the Mayor on January 27th, after neighbors informed CB3 that they were being approached by developers on the street. 45 Rivington's previous owner, Village Care, had requested CB3's support in altering the deed restriction a year previous, so the locals were suspicious. "Our explicit request was that if a deed restriction had been lifted, every effort needed to be made to reverse it," Li said. "And that [45 Rivington] needs to remain a community facility." The letter got no response.

Hinton told Politico this week that while the city's Community Affairs Unit heard complaints from CB3, "no one understood the implications fully until late February."

The Department of Investigation, Comptroller Scott Stringer's office and, most recently, the Attorney General's office have all launched investigations into what happened. 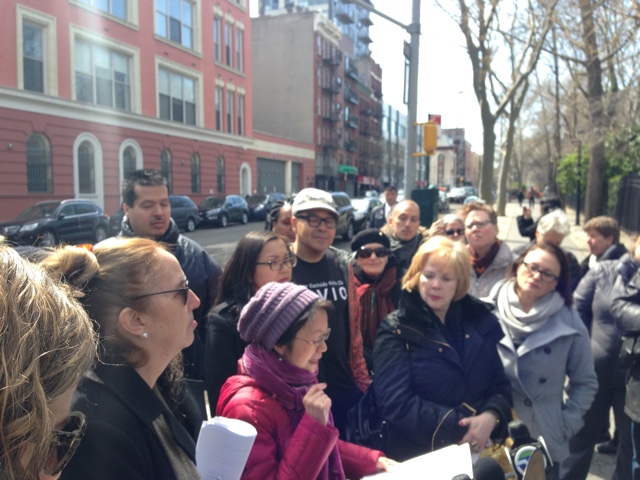 In the meantime, details of the negotiation keep getting knottier. The Daily News reported last week that lobbyist James Capalino, who represented Village Care (which sold 45 Rivington to Allure Group in 2014 for $28 million) before moving to Slate Group, has bundled $50,000 in donations to Campaign for One New York, which support's the Mayor's 2017 reelection efforts. The donations started coming in last October, about a month before the deed restriction was lifted. (A spokeswoman for Capalino has since denied that Capalino "represented Slate" in the Rivington deal; Hinton reiterated that the Mayor "has never discussed the sale with anyone, including Mr. Capalino.")

Councilmember Margaret Chin today announced that she is introducing legislation that would mandate radical transparency in all deed negotiations that could change a city-imposed restriction on a building's use. The legislation would require public notice well before the city considers lifting a deed restriction, and mandate a new online database including property records for all NYC buildings that are subject to the City's deed restrictions.

Until recently, announcements of deed restriction negotiations were only listed in the City Record. In the case of 45 Rivington, the NY Times reports, public notice of a hearing on the deed changes was listed in the Record for one day—May 11, 2015.

According to the Mayor's office, DCAS mandated on March 1 that going forward, notice will be made "not only in the City Record but to the affected Borough President, Council Member, and Community Board."

"Really, it needs to be the law," Brewer challenged on Wednesday. "We need to do more. I can't tell you how many properties there are in this City with deed restrictions, or where those buildings are. Transparency is needed."

Aurora Guzman, 48, has lived on the Lower East Side for 35 years. "We have homeless in the streets, and veterans who don't have a place to stay and have a very hard time getting medical attention," she said. "Politicians are not always very transparent in their deals. I think they... are really trying hard to make this city a city for a certain population."

"The Mayor is considering all legal options against Allure to determine if some kind of restitution can be made on behalf of the community," said Hinton on Tuesday. It was not immediately clear what form that compensation might take.

Allure Group came forward with its first statement since the condo sale on Monday. "We tried to make Rivington House viable as a for-profit skilled nursing facility," Marvin Rubin, a partner at Allure, told WSJ. "When it became clear that this was not possible, we followed all proper protocols and sold the building."

CORRECTION: An earlier version of this piece said that the deed restriction was lifted in June 2015. It was in fact lifted in November 2015.

#45 rivington street
#aids
#development
#Lower East Side
#luxury
#original
Do you know the scoop? Comment below or Send us a Tip