Grease spills might seem like no big deal—give or take the massively negative impact grease has on our sewer system—but that doesn't mean they don't cause seriously dangerous conditions, especially at night. There was one such grease spill in Manhattan near the entrance of the Williamsburg Bridge last night, which caused at least a few wipeouts by unknowing cyclists, and a lot of shrugging from officials.

According to cyclist Daniel Kim, the spill was spotted around 1:45 a.m. on Clinton Street between Rivington and Delancey, in front of Clinton Supermarket Corp. "There was a huge grease spill all over the bike lane and partially in the street for almost fifty feet down the center of the street," he said.

Someone tried to flag me down to warn me but it was too late and I wiped out. I fell and a taxi almost crushed by head. We had a few rough words before realizing we were victims of the same issue. We both blocked the bike lane and warned incoming bikers of the danger. The bike lane was slippery as shit with some unknown rotten smelling grease substance. He said another person wiped out earlier. As soon as you rode over the stuff your bike just shot away from you.

Kim says a local started hosing down the grease (which had the smell of "dead flower water from a cemetery"), and blamed it on a garbage truck. "Maybe it was the fault of sanitation as he claimed, or maybe he was trying to cover up illegal waste disposal that went badly," Kim told us. "He was spraying for a good twenty minutes straight...but he was only spreading it"

After wiping out, Kim spent much of the evening warning other cyclists and trying fruitlessly to get officials to pay attention to the spill. Kim says he filed a report with 311, and tried to emphasize the seriousness of the situation to the blithe operator.

"Because no one fucking showed up we waited and flagged down bikers warning them of the danger," Kim said. "The stranger and I...both knew we had to stay because if someone else was hurt it would be on us. " Kim finally decided to call 911, and police showed up around 2:30 a.m. 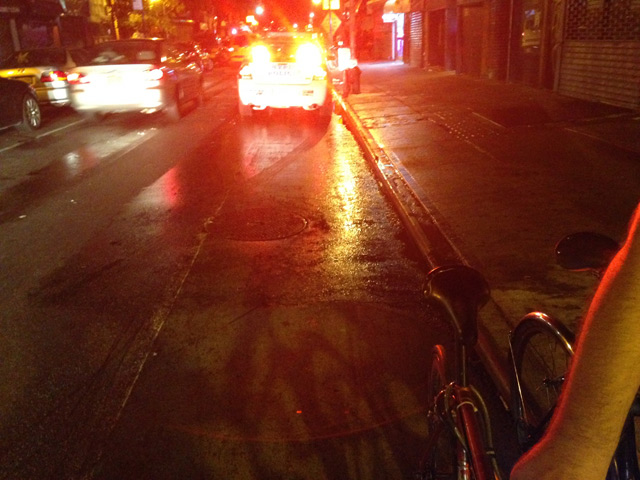 They said they couldn't do anything but call waste management. We asked them to wait and block the street or put cones out, but they told us that they couldn't because there could be muggings up ahead they needed to attend to that. We were both awestruck.

Kim finally left just before 3 a.m., doubtful that the cops were going to stick around and warn people. Thankfully, it was eventually covered in sand today. "If anyone else got hurt after we left I believe the city is liable," he said. "311 sucks ass for this type of immediate hazard situation and they don't know what the fuck they're doing. Just call 911, ignore their machismo bullshit and they'll probably deal with it."

You can be charged for disposing of refuse on streets or highways. We called officials to find out more info about the cleanup, and were questioned as to "whether this was newsworthy."

#bikes
#clinton street
#grease spill
#original
Do you know the scoop? Comment below or Send us a Tip