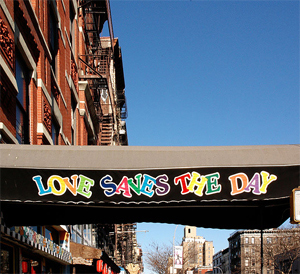 East Village kitsch mecca Love Saves the Day (MySpace) will close next month after more than four decades in the neighborhood, Vanishing New York reports. Originally opened in 1966 on 77 7th Street, the day glo-painted shop moved down the block to its current location at Second Avenue and 7th Street in 1983, just in time for a cameo in Desperately Seeking Susan, in which it's immortalized as the boutique where Madonna traded in her leather pyramid jacket for rhinestone studded boots.

The cluttered store was always packed with eclectic items ranging from funky threads to Star Wars paraphernalia to obscure pop culture ephemera. According to the Villager, the landlords tried to triple the rent in 2005, but owner Leslie Herson and her husband were able to negotiate a new three-year lease. Now it's 2008, and with rents declining, you'd think they'd have a better chance of hanging on. Of course, there's probably also a shrinking market for their inessential oddities.

Perhaps another factor, according to Racked, is that Leslie passed away over the summer. Her husband still maintains an LSD in New Hope, Pennsylvania (home of Ween), but that's small consolation when one contemplates the corner of Second and 7th without Love Saves the Day. No matter what depressing chain store comes in its place, it's now clear that we've officially become the old grouch droning on about how things used to be so much better in the old days. But they really were!