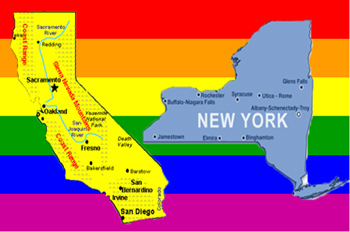 The California State Supreme Court refused to put a hold on gay marriage in its state, denying a requested stay by opponents to the legal and social evolution that is scheduled to go into effect June 17th. The decision was 4-3 against the stay.

Opponents of the May 15 decision allowing same-sex couples to become legally married had collected enough signatures to place an amendment on November's ballot specifying marriage was restricted to a bond between a man and a woman. However, the Supreme Court found that there was insufficient reason to stay marriage until November, so gay marriages will begin as planned in two weeks.

Gay marriages aren't allowed to be performed in the Empire State, Governor David Paterson asked state agencies to recognizes same-sex marriages performed in other states. An Arizona-based group (linked to James Dobson's Focus on the Family) threatened to sue to stop that decision, and the lawsuit was filed yesterday. The lawsuit suggests Paterson illegally went around the State Legislature, but the NYCLU's Donna Lieberman said, "The governor is doing what a governor should do, which is direct his agencies to comply with the law. He’s not circumventing anything. He’s not doing anything that violates the law."

#ballot measure
#california
#dobson
#gay marriage
#paterson
#supreme court
Do you know the scoop? Comment below or Send us a Tip
A new Gothamist is coming! We’ve moved comments over to our beta site. Click here to join the conversation and get a preview of our new website.