The lottery, as a wise man once said, should really be called the jack squattery because that's all you'll probably ever win in it. Forget those normally wise words though, because today a lottery opens that has a prize more valuable than money: affordable housing in New York City.

535 Carlton Avenue is Pacific Park's (formerly Atlantic Yards) first all-affordable housing property, with 297 apartments up for grabs for people and families making anywhere from $20,126 to $173,415. 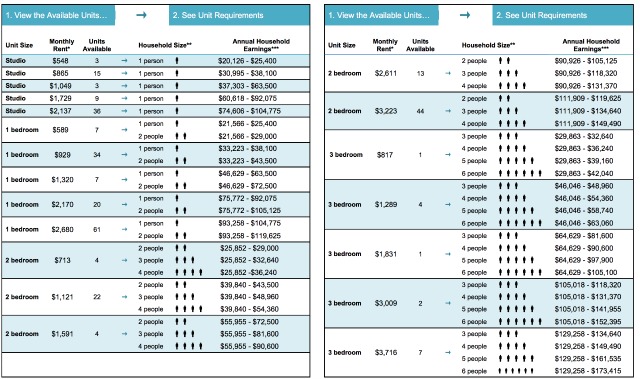 As you can see from the table above, the majority of apartments are in the middle and high-income band, and the odds are especially in your favor if you're someone making between $93,000 and $116,000 looking for a one-bedroom apartment. But hey, you could also wind up being the lucky soul who gets one of three $548/month studios. 50% of the units are being set aside for residents of community boards 2, 3, 6 and 8, another 5% for municipal employees, 5% for mobility-disabled tenants and 2% for vision- and hearing-disabled tenants.

Of course, beyond the fact that you'll be competing with at least 50,000 other people for these apartments (at least based on previous housing lotteries), you'll also be moving into some bad real estate juju. Atlantic Yards/Pacific Park has been beset by problems for years: the first building in the complex was allegedly a leaky mess as it was being constructed, the city and state and Forest City Ratner had to make a deal that the housing would be finished on an accelerated timetable or FCR would face huge fines, the "affordable housing" isn't exactly seen as affordable and there's also that weird rebranding for some reason.

(Update: In an email statement sent in response to this article, representatives from Forest City Ratner stressed that "exposure to water during the construction process is incredibly common. It is a mischaracterization to accuse a building under construction of leaking.")

But forget all that! This is the urban jungle and you want to make sure you have a place you can afford when New York City declares independence from President Trump, so apply for an apartment on Housing Connect today!

#535 carlton avenue
#affordable housing
#fort greene
#it was always pacific park
#pacific park
Do you know the scoop? Comment below or Send us a Tip
A new Gothamist is coming! We’ve moved comments over to our beta site. Click here to join the conversation and get a preview of our new website.