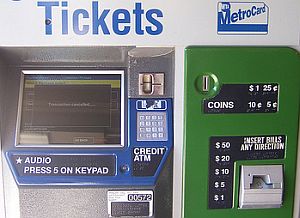 More details have emerged in that “magic MetroCard machine” story the Post broke yesterday. Turns out it that it wasn’t a MetroCard machine, but a LIRR ticket machine (which also dispenses MetroCards). And make that machines; the Times reports that from 2004 until last May, countless people have unwittingly used the machines to get free tickets and MetroCards, exploiting a software glitch that let riders with insufficient funds on their debit card or credit card obtain the tickets for free.

A Metro-North spokeswoman tells the Times that aside from the three suspects (who allegedly netted $800,000 by selling cut-rate LIRR tickets and MetroCards) almost a thousand people unknowingly scored free tickets to the tune of $74,000. The software problem was corrected after the arrests, and now the LIRR will seek restitution from the grifters and try to force the vending machine provider, Scheidt & Bachmann, to pay for some of the railroad’s losses.

After several years of freebies, the problem was only discovered in May during a software test. As technicians looked into the problem, they noticed suspicious transactions from two debit cards issued by First Republic Bank. According to the Times, by the fall of 2006 the cards were being used to “buy” more than $10,000 in tickets and MetroCards a month. Earlier this year, the “purchases” totaled $67,000. The three Long Islanders arrested recently are charged with fraud; they’re pleading not guilty.

#cheap
#free
#machine
#magic metrocard
#money
#MTA
#scam
Do you know the scoop? Comment below or Send us a Tip