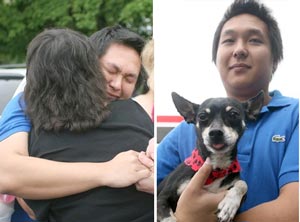 Awww: A dog that went missing from Sunset Park on Monday afternoon was found 60 miles away on Long Island the next day. Newsday reports the chihuahua named Boy was reunited with his tearful and grateful owner yesterday.

Holbrook residents Dino and Teri Vassino found the pup on Tuesday and thought it belonged to neighbor Sue Pierce, whose family also has a Chihuahua. But they weren't missing a dog, so, per Newsday, "Pierce took him to a Selden animal hospital, which found an identification microchip embedded between Boy's shoulders." She called the owner, Arc Liu, who was thrilled that his dog was found. Yay for pet microchips!

Liu said his dog went missing when he visited a friend's fenced-in backyard and suspects someone picked up the dog "and went the wrong way." As for Boy's health, Pierce said he seems good, "except his feet on the underside seem to be cut up."

In January, a Colorado trucker was reunited with his dog that had run away at a Hudson Valley rest stop. And microchip your pet!