If the definition of a bike commuter is one who commutes to work on a bike, then I have a decent chance at becoming one.

For the final piece in this series, I actually biked into the city, wearing non-athletic wear, and went to an appointment. This would seem a reasonable final threshold to be able to say, “Yes, I bike commuted into the city!”

For this trip, I went with my friend Joseph Phelan, a progressive media activist who was once a bike messenger in the city. Joseph has the cuffed pants, full sleeve tattoos and skinny tires of a real bike commuter.  He is my biking spirit animal. But the real challenge in the ride came later, when I biked back on my own.

Joseph and I met up in Brooklyn. Some of his initial tips included staying on the left side of one-way streets that don’t have bike lanes, “because every car doesn’t have a passenger but every car has a driver.” Thus you’re less likely to get doored riding on the passenger side of parked cars.

He also told me to watch side mirrors to see if there are people in the parked cars and, if so, be extra careful to watch for their doors opening. Though I found it hard to focus on side mirrors when I was supposed to be focused on biking, and though my blurry vision led to a lot of false positives, I still found it a helpful tip.

Joseph suggested we go through downtown Brooklyn to get to the Manhattan Bridge. This time, as I easily wove between the dense traffic along Jay Street, I realized how much I'd improved in mere weeks.

We rode on a Friday morning, in early November, during rush hour. I was afraid that would mean more bikes—and more potential for me to screw up and crash. But thankfully the bridge and streets weren’t too crowded with bikes as far as I was concerned—because they were all biking past me. Score one for sloth!

Still, Joseph explained, “The greatest danger to you is from other bikers.” He also pointed out that even though I live on a one-way street a few doors down from an avenue, I shouldn’t “salmon” or bike against traffic to get to the avenue, even for just a few feet.

“The greatest danger to other bikers is you,” he warned. No more biking upstream.

We rounded the bend of the Manhattan Bridge and dumped out onto the streets of Manhattan. To get to our destination in the Meatpacking District, where I had a meeting, we rode up Chrystie Street, hung a left on Houston and then kept zig-zagging—right on Lafayette, left on Bleecker, right on 6th Avenue, left on Christopher.

I felt nimble and at ease, taking in a photo shoot with some leggy models on one block and a very old man with a very old dog crossing at a very slow pace on the next. I marveled that this all exists in the same place—and here I was able to experience it only because I was on a bike.

Then I hit cobblestones. Fucking cobblestones. I don’t even like driving or walking on cobblestones, but biking on them? The even more embarrassing thing is that while you’re bouncing around this way and that trying to look suave but actually about to tip over, all the curse words you’re intensely shouting are rendered hesitant and non-threatening by the bumps. I sounded like Elmer Fudd.

Basically from Christopher to 14th, whatever route we were taking seemed 70 percent cobblestone. Joseph said something about standing up, biking with my ass off my seat.

“You get more control that way and it’s easier on your body,” he explained. I tried it and almost fell over. Again, not a real “bike commuter.”

And again, fuck you, cobblestones. 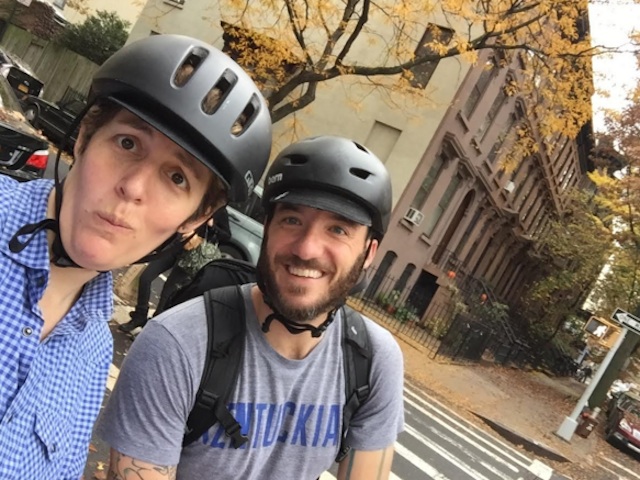 The author and her friend on their fateful ride (Sally Kohn)

To add to the fun, the roads were slippery from the night before and I could see oily splashes here and there and I didn’t slip or fall. All through lower Manhattan, over all the cobblestones, I stayed generally upright and pedaling. It wasn’t graceful, but I got the job done.

Even pedaling slowly and steadily, I still arrived to my appointment a sweaty mess.  I realize that the more I do this, the better shape I’ll be in and probably (hopefully!) sweat less, but for now, I can’t see biking in for any serious meeting or a TV segment in which I need to look halfway presentable.

Joseph tried to convince me of the wonders of something he calls “shower wipes”—but I pictured the little wet naps they give you when you eat BBQ which seem inadequate for BBQ and especially for bathing, and either way, definitely gross. I had a little time before my meeting so I could just naturally cool off and dry out a bit, but I was still glossy.

But I did it! Then I had to bike back.

I decided for the scenic and easy-to-navigate route down the greenway down the West Side Highway, because despite what you might think, dear Gothamist commenters, I don’t feel the need to prove anything to y’all. And I wanted the easy route, which was also beautiful. Heck even New Jersey looked kinda pretty with the midmorning light flickering across the Hudson, although maybe I was high on endorphins.

I almost killed about 238 tourists—either by nearly crashing into them when they aimlessly wandered into the bike lane or by giving them heart attacks when I yelled at them for almost doing so. I’ve had a similar experiences the times I’ve tried Citi Bikes.

Just like a sidewalk is for walking, a bike lane is for biking. In my experience, the vast majority of people walking on the Brooklyn Bridge don’t seem to understand either. It was one of those supposedly fun things I’ll never do again.

As I rode home down Tillary, across Atlantic and into Carroll Gardens for a lunch meeting, feeling damn good about myself honestly, I pondered what my biggest takeaways were from this process.

New York can be loud and congested and fast and like a dense labyrinth of concrete and metal through which you are pushed as though on a conveyor belt. Being on a bike feels free and even rebellious, like you have subverted how the city is intended for subways and cars and pedestrians and carved out your own autonomous existence. And in that space, the city is peaceful and wide and filled with secret delights—water lapping against the shore under the Manhattan Bridge, graffiti only bikes can find, squished rats rotting in the morning sun and, yes, cobblestones too.

This is the final story in a three-part series.

Sally Kohn is a columnist and CNN political commentator. You can find her online at sallykohn.com.